Here’s Why The Cast Of “A Goofy Movie” Is Brilliant 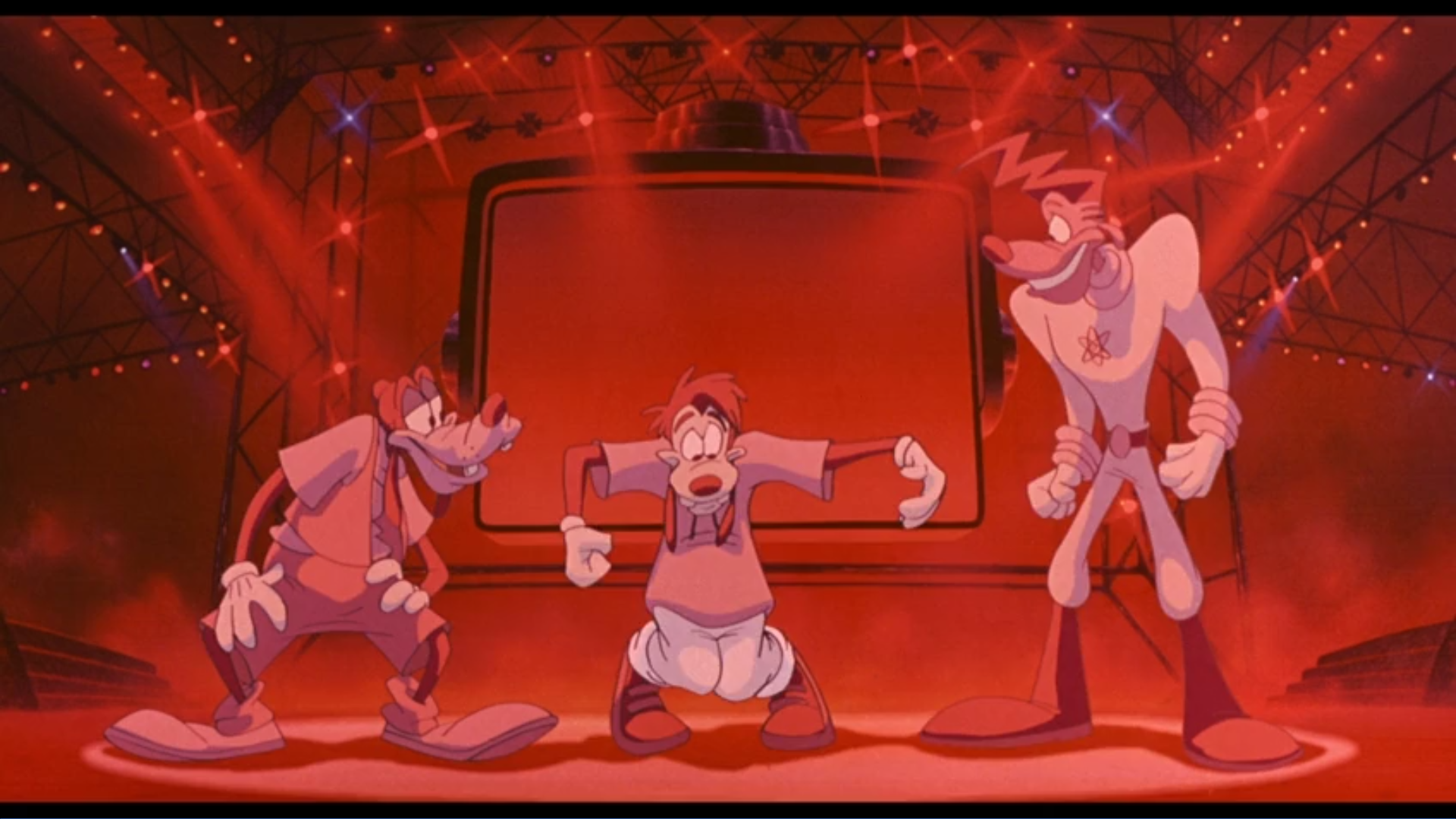 Posted at 22:26h in Uncategorized by Ellie 0 Comments

This year marks the 25th anniversary of A Goofy Movie. With the launch of Disney+, there will be more people falling in love with this gem of a film. In thinking about what makes this movie so wonderful, my initial reaction is to mention the A Goofy Movie cast.

You can find out fairly quickly when you browse through my posts that I am a HUGE fan of A Goofy Movie. I wrote about the kids’ meal toys and gushed over it when reminiscing about VHS tapes. I am delighted to know that I am not alone. So many others feel a strong connection to this film for their own reasons.

Every good Disney fan that A Goofy Movie would not be possible if it wasn’t for the television show Goof Troop. The show was part of the wildly popular Disney Afternoon programming block, and also part of Saturday morning cartoons on ABC. Despite the show’s success, A Goofy Movie stands on its own. For one, Max is a bit older in the movie than the show and there are some new characters. Furthermore, the animation is a bit more polished and it’s a musical. While all of those things help the movie, it is the magnificent cast in A Goofy Movie that helps make it memorable.

Bill Farmer has been the voice for Goofy for 33 years. Odds are that if you hear Goofy’s voice, it is most likely him. He has performed as Goofy in nearly every film, TV show, or video game since 1987. You can also hear him in the parks in Mickey’s Philarmagic and the latest Disney World attraction: Mickey’s Runaway Railway. He also provides the voice of Pluto and fills supporting voice acting roles. Farmer continues to play Goofy and shows no signs of stopping any time soon.

Bill Farmer as Goofy is magnificent. It is shocking it took until 2009 for him to be officially named a Disney Legend. He brings so much life to Goofy and his delivery. In A Goofy Movie, we see a side of Goofy that we never saw before. We saw the undying amount of love he has for Max, and we watched him handle the heartbreak of feeling rejected by his son. We understand Goofy’s feelings because of Bill Farmer. You may never read this, but I’ll say it anyway: Thank you, Bill.

Jason Marsden provides Max’s voice in A Goofy Movie, but this is not always the case.  not always the voice of Max. You can hear Marsden in An Extremely Goofy Movie, Mickey’s Twice Upon Christmas, and Disney’s House of Mouse. He does not provide the singing voice for Max in the film. That credit goes to Aaron Lohr. Marsden is a veteran voiceover actor. It tends to be his normal voice, so don’t be surprised if you hear Max’s voice come out of a soldier in a video game or other side characters. Notable roles include Haku in Spirited Away, Kovu in The Lion King II, and various video games like Jurassic Park and Fallout: New Vegas. He currently lives in Nashville and continues to do voiceover work.

So many people connect with “A Goofy Movie” because it’s a cute story about a father and son bonding. Somehow, Marsden can portray characters using the same voice, and we don’t seem to mind. It will always be synonymous with Max Goof for years to come because of Marsden’s performance. We sympathize with Max throughout the movie and can forgive him for tricking his dad into taking him to California for the Powerline concert. You could easily view Max as ungrateful and selfish, but hardly anyone will remember him as that. Instead, we remember his tremendous amount of growth and the love he has for his dad.

Jim Cummings is usually the voice for Pete. Since 1992, Cummings has been the voice for Pete in many films, television, movie, and theme park appearances. Cummings is the ultimate legend in Disney. He also provides the voice for: Winnie the Pooh, Tigger, the Tasmanian Devil, Monterey Jack, Bonkers D. Bobcat, and Ray from Princess and the Frog. He has also played hundreds of side characters in dozens of television shows. If you grew up watching cartoons in the 90s, Jim Cummings probably did a voice in your favorite show. Cummings is still a world-renowned voice actor and continues to perform.

Pete is actually older than Mickey Mouse. He first appeared in Disney’s Alice Comedies in 1925. This was four years before Mickey would charm everyone in Steamboat Willie. Although his motives have changed throughout the years, he remains mischievous in his actions and personality. Cummings’s voicework for Pete is absolutely perfect for this angle. We can hear it in Pete’s voice that there always something else going on underneath. In A Goofy Movie, he is more of Goofy’s friend as his coworker. He lends parenting advice to Goofy, and ultimately this advice pushes Goofy to want to go on a road trip with Max. Cummings’s delivery makes us question Pete’s motives, but we cannot necessarily call him a villain. Either way, Jim Cummings deserves thousands of rounds of applause for his performance.

Rob Paulsen is the perfect voice for P.J. He is another voiceover legend. He has been in the business since 1980 and is easily one of greatest voiceover actors of all time. While he is the voice for thousands of characters in film, television, and video games, his most notable roles include: Pinky from Pinky and the Brain, Yakko from Animaniacs, and Donatello in Teenage Mutant Ninja Turtles. Paulsen was diagnosed with throat cancer in 2016, but is currently in remission. His podcast, Talkin’ Toons With Rob Paulsen, has been on hiatus since 2019.

Even though P.J. has only really appeared in Goof Troop, A Goofy Movie, and An Extremely Goofy Movie, it seems like he’s been a fixture in Disney animation. Kids today might only recognize him from A Goofy Movie, but hopefully, Disney+ will change that as more people turn to Goof Troop. Paulsen’s delivery is magnificent. P.J. is Max’s dependable best friend. He questioned Max’s actions, which you could say helped to guide Max on his path of self-discovery. Paulsen’s voice brings a sincere sweetness to P.J., which makes us trust him wholeheartedly, unlike his father.

Kellie Martin provides the voice for Roxanne. Roxanne’s only other appearance was in House of Mouse, but the voice was provided by Grey DeLisle. You can hear Martin as Sadira in the Aladdin television show and Mona in Mickey’s Twice Upon A Christmas. Martin is also known for her live-action roles as Lucy Knight on ER and Hailey Dean on Hailey Dean Mystery. Martin is still working as an actress and operates a toy store, ROMPstore.com.

Even though Roxanne is never really seen again, Martin’s voice fits the character design very well. She is the ultimate “girl next door” as Max’s crush. She comes off as kind, so we instantly buy into Max’s attraction and hope they become a couple. When I think about Roxanne, I remember her voice cracking after Max asks her to go with him to Stacey’s party. She demonstrates that awkward teenage nervousness everyone has no matter how cool or well put together they appear.

Although he is uncredited, there is no doubt that Pauly Shore is the voice of Bobby. As a 90s icon, Pauly Shore’s face and voice are instantly recognizable. He is featured in some 90s cult classics including Encino Man, In The Army Now, Son In Law, and Bio-Dome. Shore has had some smaller roles in various films and TV shows, but mostly does performances and guest appearances as himself.

According to Internet Movie Database, Pauly Shore requested to be uncredited so that Disney would not try to capitalize on his name like Robin Williams for Aladdin. But the moment Bobby speaks, we all know who it is, and there is literally no other voice that could pull off Bobby. He weird but charming and supportive to Max and P.J. Not to mention, the sale of cheese whiz probably goes through the roof after someone watches this movie.

Buttram’s voice is iconic, especially in Disney films. He was well known on television from the 1950s-1990s for portraying an array of characters. His Disney credits include the Sheriff of Nottingham in Robin Hood, Luke in The Rescuers, Chief in The Fox And The Hound, and Napoleon in The Aristocats. Sadly, Pat Buttram died from kidney failure in 1994 at the age of 78. A Goofy Movie was his last role.

This minor character cannot go unmentioned when discussing the A Goofy Movie cast. Buttram is the ultimate Disney legend. His voice is recognizable, but in “hey, I know that voice” kind of way. We know we have heard it but just can’t remember where. It turns out; there is a lot of love for Buttram in the voice acting community. In this clip from D23 in 2015, Rob Paulsen says that everyone has a Pat Buttram voice they try to emulate.

Tevin Campbell is an American singer and songwriter as well as the voice for Powerline. Some of his hits include “Tell Me What You Want Me To Do” and “Alone With You”. He performed as Seaweed in Hairspray on Broadway in 2005 and has continued to produce music and perform. Most recently, he was on Queen Sugar on the Oprah Winfrey Network.

Powerline makes A Goofy Movie—end of story. The lovable teens are obsessed with him throughout the film, and although we don’t see him until the very end, so are we. The songwriting plays a significant role, but it is Tevin Campbell’s performance that makes it. Somehow, Powerline is a combination of Prince, Michael Jackson, and Bobby Brown. His fans look up to him and are instantly put in a great mood when his songs begin. I jokingly tell people that I am convinced Bruno Mars’ inspiration was Powerline. (Seriously, can that guy please cover “I 2 I” already?!?)

A Goofy Movie resonates so much because of the amount of heart within the film. As a child, I remember watching the movie and feeling entertaining as I danced around with my siblings. It became the ultimate feel-good movie on sick days and bad days. It really goes to show that voice actors do not receive nearly enough credit for the work they do. We do not see the actors often, so you may walk by them on the street and not notice. But their voices reverberate in our hearts, and that could not be more true than with A Goofy Movie cast.

Although the film has only been out for 25 years, it is clear that “A Goofy Movie” will be a timeless Disney classic. D23 was prepared to host a series of anniversary events all over the country to commemorate the anniversary. The recent pandemic changed those plans, but Disney still hosted a virtual celebration the week of April 6th, 2020. You can check out some snapshots from the virtual event from the D23 website. For more A Goofy Movie content, you can read about the kids meal toys promotion here.