A Goofy Movie Burger King Toys – A Look Back 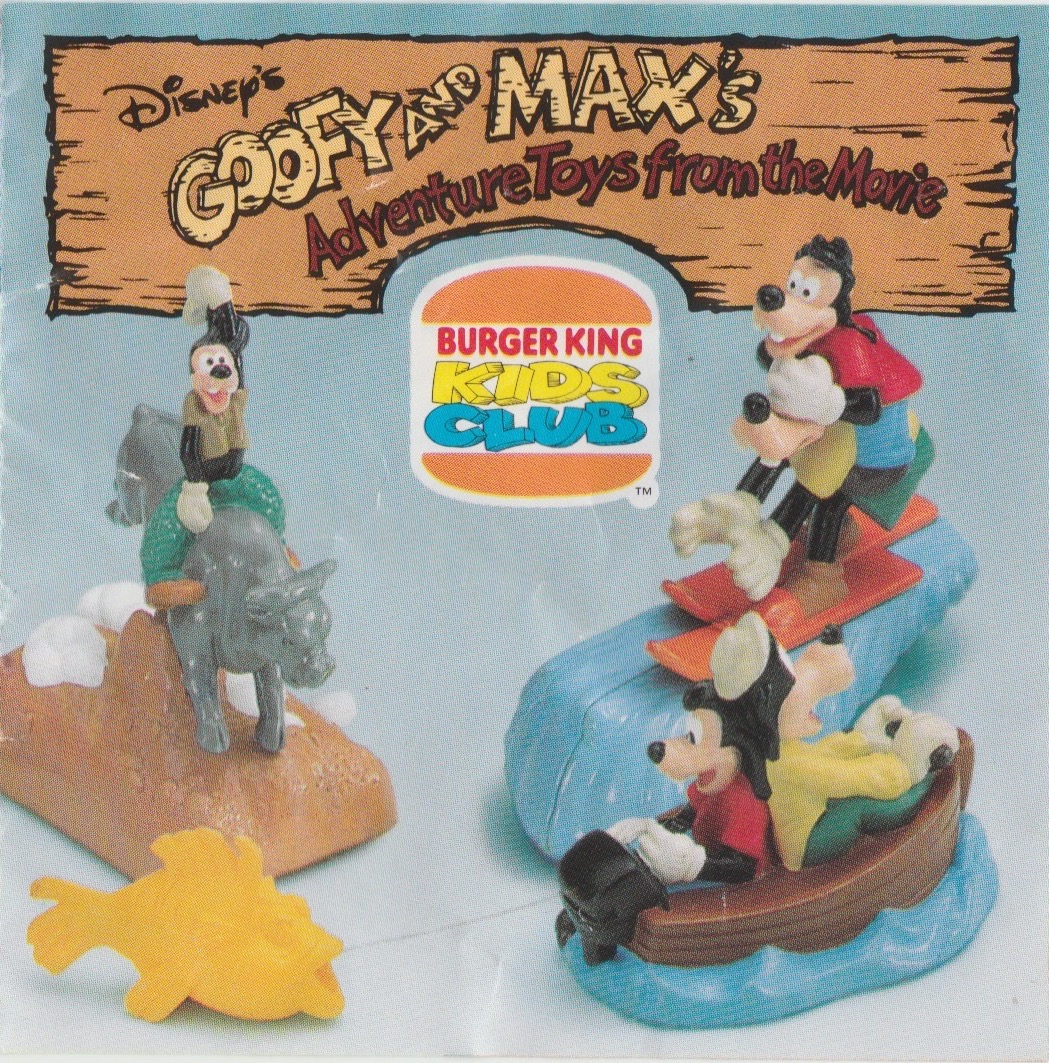 23 May A Goofy Movie Burger King Toys – A Look Back

Posted at 13:18h in Uncategorized by Ellie 0 Comments

Kids’ meals toys are practically staples in a 90s kid’s childhood. You likely had several and have fond memories of playing with them. They were fun and a great way to get a kid excited about a movie. This is especially true when we look at the Goofy Movie Burger King Toys.

Disney often has widespread success and is synonymous with classic animated films. The words “cult classic” do not seem to match Disney. Cult classics are films, books, television products that became popular with a specific faction of society. Generally, a cult classic does not see success at first. The following develops over time and through word of mouth. Those that fall in love with that thing then become dedicated fans.

A Goofy Movie is the cult classic of the Disney Renaissance. When it was first released into movie theaters on April 7th, 1995. Disney did not have a lot of faith that the movie would do well. Disney producer Don Hahn once said, “It wasn’t even a B movie. It was a C movie.” Disney did not bank a ton of box office money from its theatrical run, and critics did not have much to say about it.

Even with all this, A Goofy Movie is considered a beloved film. There is a good chance that you and many of your friends and families can recite “I 2 I” word for word. Once again, 90’s nostalgia drove millennials and their children to adore A Goofy Movie. Unfortunately, we don’t have too many collectibles from the movie’s release. But we do have Goofy Movie Burger King toys.

Was A Goofy Movie Successful When It First Came Out?

You can see the mixed emotions of A Goofy Movie with its Rotten Tomatoes scores. If you consider just the 27 critic reviews, 59% thought it to be “rotten”. However, audience scores could rate it at 70% fresh. At the end of the day, whether or not you like a movie comes down to personal preferences. But I can’t help but wonder why a movie I loved as a kid had such a mixed reaction.

Personally, I love A Goofy Movie. I often find the songs stuck in my head for long stretches of time. I may carry a bit of a bias with the film, though, considering it was almost always the first movie my siblings and I watched when school was out for the summer. We felt connected to Max and his classmates as they excitedly awaited the day after the last of school. If you have a heart, there is bound to be a moment or two that reaches you in the film. It is honestly a touching story of a teenage son connecting with his father. Plus, there are plenty of absurd Goofy moments that will make you chuckle once or twice.

Due to its less than stellar theatrical run, there is not a whole lot of A Goofy Movie memorabilia from its release. You can find plenty of Goof Troop toys that came out a few years before the movie. But these are based on the Disney Afternoon television series. If there any sort of collectibles to be had from the time, it’s the A Goofy Movie kids meal toys.

You might be inclined to remember these toys as “happy meal toys.” Technically, you would be incorrect. A Goofy Movie was released when Disney had a partnership with Burger King to use its licensing for kid’s meal toys. At the time, Burger King called these meals the Burger King Kids Club.

The name came from the cartoon characters that promoted Burger King kids’ meals. The crew was featured in advertisements and commercials for the meals, along with whatever toy was included at the time. Although they are no longer Burger King’s representatives, some locations may have a few remaining pictures of them in their play areas.

From 1994 to 2001, Kids Club marketing was run by Lowe, Lintas, and Partners. The company has since rebranded and now operates as MullenLowe Lintas Group. Their advertising and marketing division runs several successful campaigns for top companies like Starbucks, Hanes, YouTube, and Unicef.

It is no surprise that adults today can vividly remember the advertising for Burger King when Lowe, Lintas, and Partners were at the helm. Many of the kids’ meals toys millennials remember growing up came from this partnership, including coveted Pocahontas glasses, Toy Story puppets, and Lion King finger puppets. This agency was likely behind the Goofy Movie campaigns as well.

It is evident when you compare A Goofy Movie to the other releases in 1995 that people were not betting on its success. Kids’ meal toys are mostly a giant marketing tool. Disney and Burger King invested much more in Pocahontas and Toy Story than A Goofy Movie. Each of those films had kids meal toys for both their theatrical release and video release while A Goofy Movie only received this meager five toy collection.

Goofy And Max’s Adventure Toys From The Movie

The toys for A Goofy Movie feature Goofy and his son Max involved in five different hijinks. It is implied that each toy shows a moment from the movie with its title: “Goofy And Max’s Adventure Toys From The Movie” The commercial that ran to advertise the toys even said the toys were “straight from the movie.”

The funny thing is that none of these toys depict a specific moment from the movie despite its lengthy name. There are similar moments that match the toys, but it is never exact. It is unclear why a long and somewhat awkward-sounding title was chosen. It almost sounds like a place holder title. At the very least, it makes it seem like marketing in 1995 was much more kind than it is today. You don’t have to worry about the toys spoiling the movie for you before you get a chance to see it. Here’s what was available in this set: 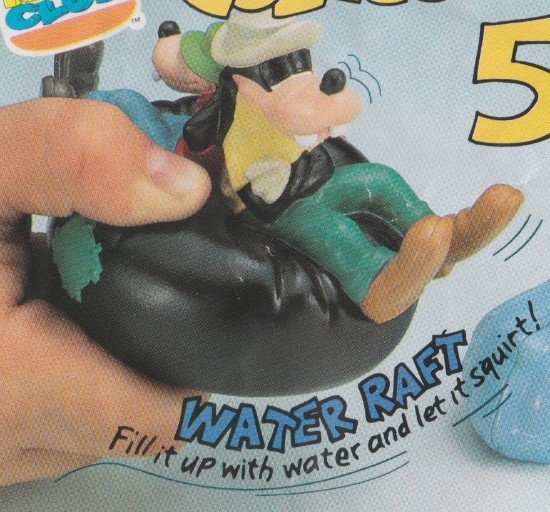 These basic water toys were my favorite as a kid because it meant new bath toys. Simply squeeze to collect some water, then squeeze again to spit it out. There is an iconic scene from the movie in which Max and Goofy are sitting floating on a river. They share a duet with “Nobody Else But You” as they realize they wouldn’t want to be with anyone else. But they are not on a raft. They are actually on the roof of the car. 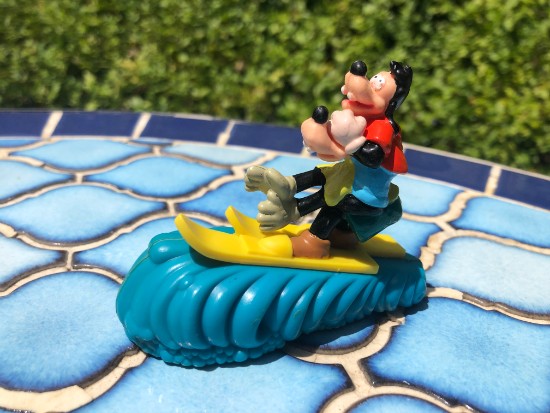 Pull back toys are probably the most accessible kids meals toys to produce that are sure to be a hit. As long as you are mildly interested in the characters or design, you will have a good time watching it fly by. Max and Goofy are seen on water skis; however, they do not water ski in the film. Either way, it’s still a fun toy. 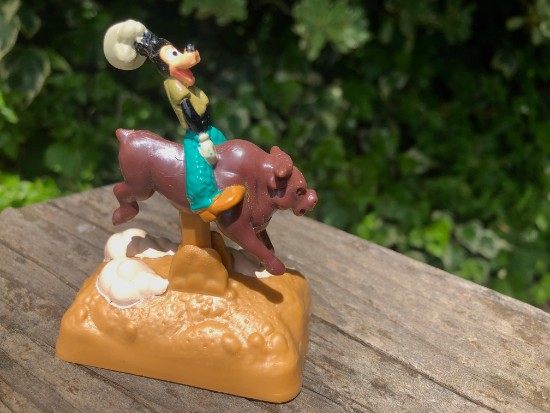 Wind up toys can also bring a good time to a fast food meal. This bull riding wind up toy only features Goofy and is also not a moment from the movie, although it does look like Goofy is handling himself much better than we might expect. 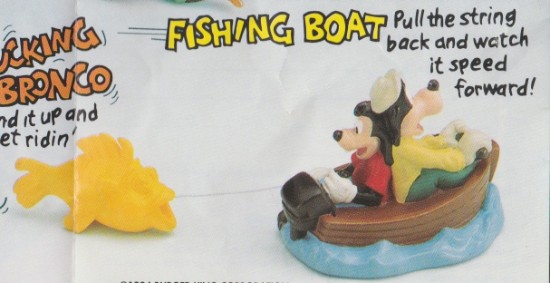 I have a soft spot for this Goofy and Max fishing boat toy because I remember having it as a kid. I distinctly remember tugging on the fish in all kinds of different directions to see how it would change. While fun, it is still not a perfect depiction of the movie. Max and Goofy only fish for a short period before accidentally catching Bigfoot and more hijinks ensue.

This basic pull back toy is arguably the best since it is actually an adventure from the movie like the name suggests. There is a scene in which Goofy and Max are chasing after the runaway car while arguing, only to have the car fall into a river.

Plenty Of Love For A Goofy Movie Merchandise

Don’t worry, Goofy Movie fans! There may not have been a ton of merchandise available in 1995, but there sure is some now. 90s kids are now having their own kids and often reminisce about the films they loved growing up. Disney recognized this and responded appropriately.

You can go onto shopdisney.com and find A Goofy Movie merchandise at any time of the year. The selection may vary, but they’re always is something. In May of 2020, there were 246 results when searching for “A Goofy Movie” on the site.

Other companies like Box Lunch have capitalized on A Goofy Movie as well. You can get these adorable couple shirts featuring Roxanne and Max. Plus, you can find tons of Powerline gear to help you stand out.

A Goofy Movie is just another example of timeless Disney classics. For over 90 years, Disney cartoons, whether as shorts or feature-length films, have been entertaining and warming people’s hearts. Even though we may be limited to the Burger King Kids Club toys as Goofy Movie relics, it is a film that continues to live on. You can read more about Disney’s relationship with kids meals toys in our history of Toy Story happy meal toys here.