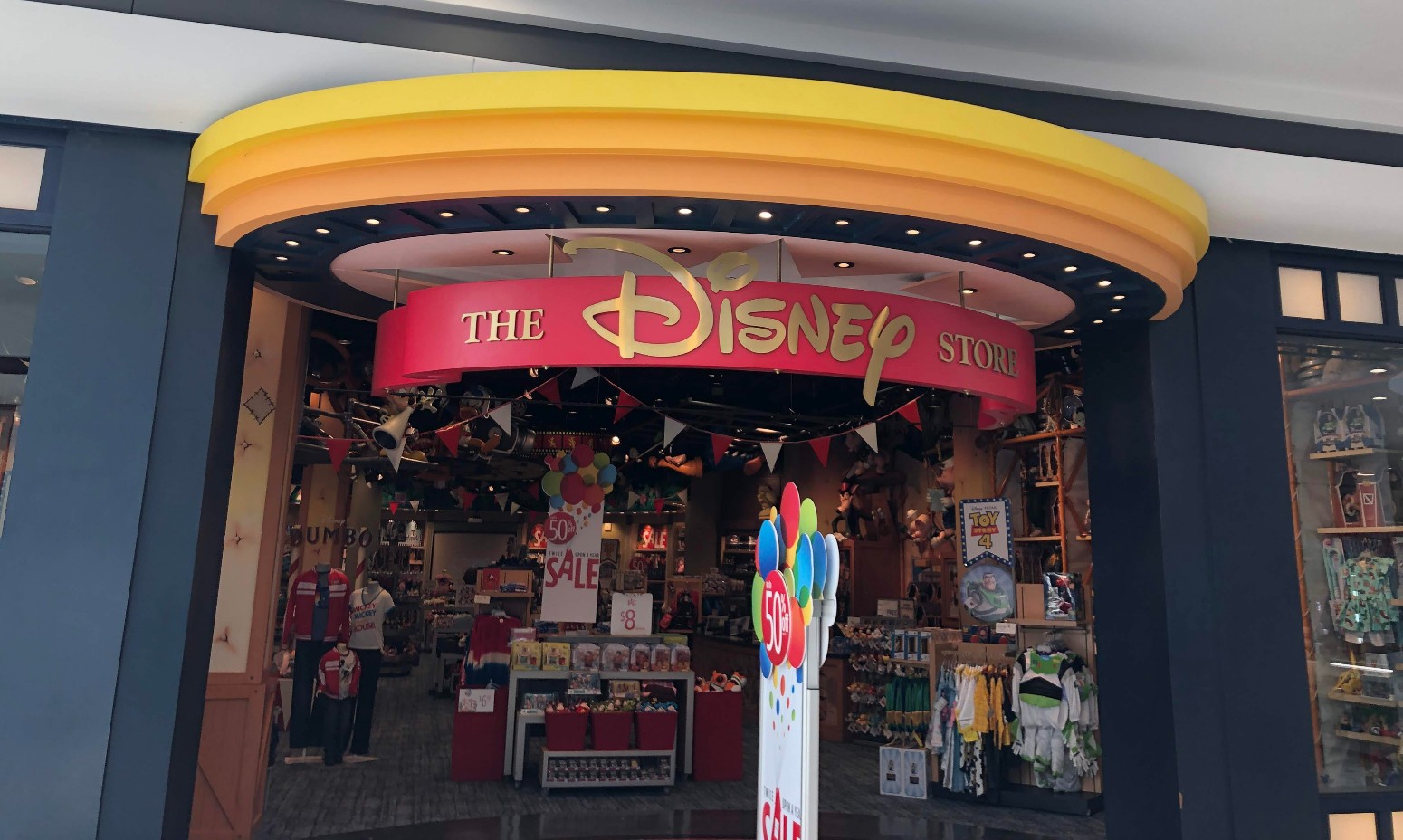 Newark, California is located about 40 miles southeast of San Francisco. It is surrounded by the cities of Fremont and Union City. This area is often referred to as the “Tri-City” area because of the close proximity of the three cities.

Located in Newark is the Newpark Mall. It is just off the Interstate 880 freeway making it very accessible by car. There is ample parking available throughout the mall. When it originally opened, there were several anchor stores. As time has gone on, only two original anchor stores remain Burlington Coat Factory and Macy’s. 24 Hour Fitness, AMC Theaters, and John’s Incredible Pizza were later added to anchor the mall

I consider the Newpark Mall to be a Disney hotspot. The Disney Store in Newark is right next to Box Lunch. Box Lunch always has different Disney merchandise and is geared towards an older crowd. You can snag a lot of great Disney things in just one visit to the Newpark Mall.

Pink and green stores seemed to explode in the nineties, but those that came of age a decade later might be more familiar with the pipe rail Disney Store. This design replaced many of the iconic pink and greek designs, like this one in Fairfield. Pipe rail stores came before the Imagination Park concept in the early 2000s. Similarly to the old design, these stores have Disney character statues within the store. The store is set up like a movie studio with a lot of our favorite Disney characters as the crew.

Step Into A Film Studio 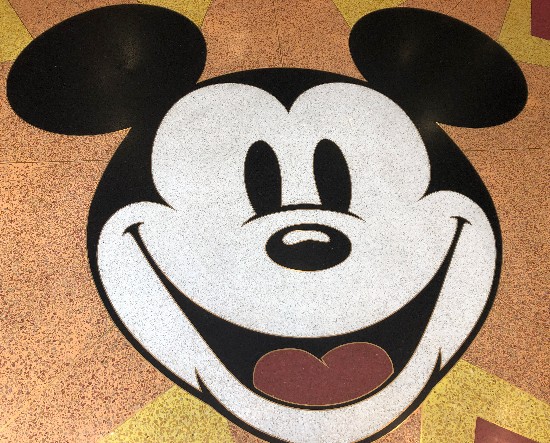 Your first look into the Disney Store in Newark is Mickey’s face projected in front of colorful design. It reminds me of older Disney cartoons where playful music introduces the short and the main character’s smiling face appears. While this part of the entrance is nice, I was immediately blown away by the statues along the walls.

Being a huge fan of Disney dogs, I was immediately fixated on the dalmatians on the right side towards the front of the store. I get excited any time I see those little dogs. Some of the puppies are looking down at you as you walk in as Pongo and Perdita stand alongside them and several film reels.

It seems almost symbolic that one of the first statues in the store features film reels given that they were a key component of the old pink and green design. Disney is able to speak to so many generations because of the nostalgia factor. They always find ways to innovate and create something new, while preserving things people once loved. 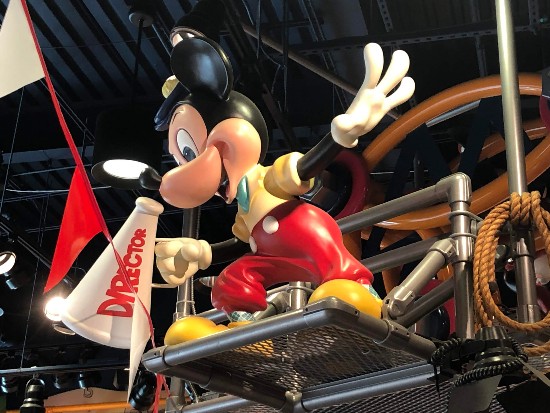 My excitement for the dalmatians almost made me overlook our fearless leader as the film crew’s director. Mickey is ready to call “Action!” with his director’s megaphone in hand. The fab five surround the center of the store. Minnie is running a projector while Donald struggles with the camera. Pluto is holding the clapperboard that shows the film’s title as Movie Magic “Backstage Antics.” In his typical style, Goofy is swinging from the rafters with a boom microphone. 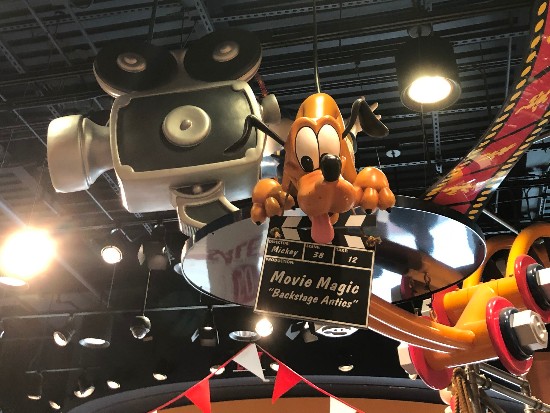 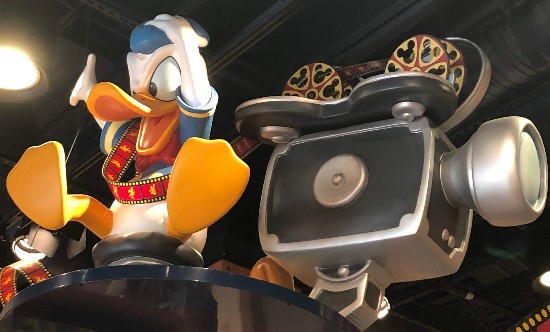 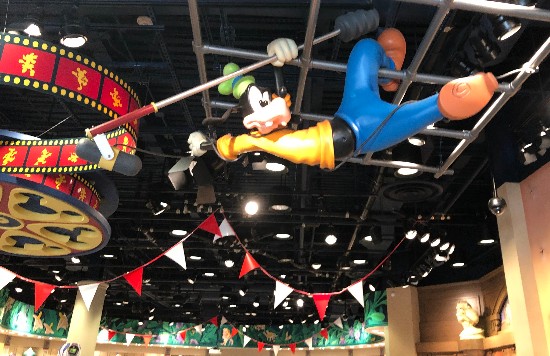 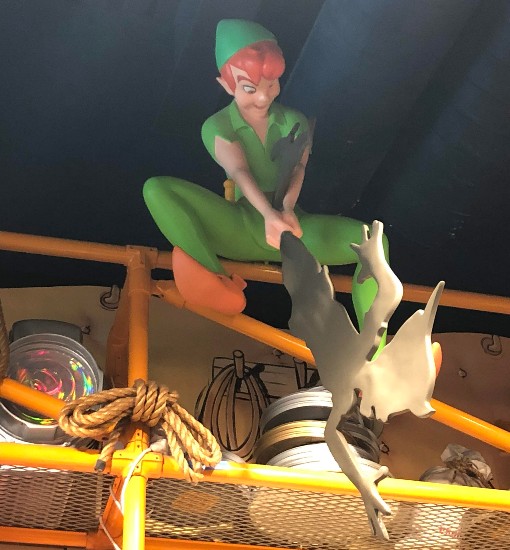 Throughout the entire store, the statues are captivating. On the left side, you see the Mad Hatter and March Hare looking over a script while hanging out with some dalmatian puppies. Further down, Peter Pan is trying to pull his shadow up. 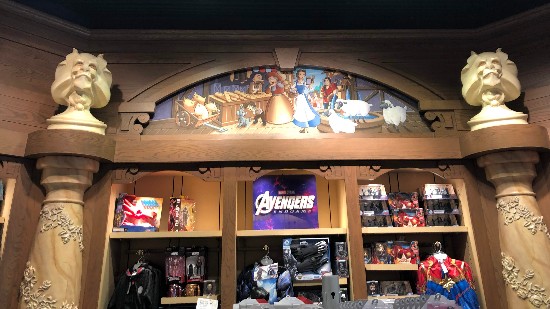 The back of the store moves away from the filmmaking stage. On either side, there are two pillars with the Beast’s head on top and roses bushes circling the beam. Between each pillar is a mural depicting Belle walking through town and reading a book. The townspeople look at her and gossip as Gaston arrogantly smiles towards Belle.

In the very back, we can observe paintings of Alice, the White Rabbit, and the Chesire Cat in a garden surrounded by leaves. Presumably, they are wandering through the gardens of Wonderland. 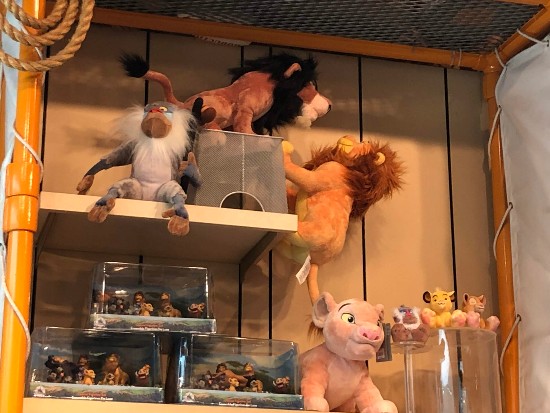 Additional fun movie scenes are even created with the merchandise. For example, the Lion King merchandise area has Mufasa hanging on the edge with Scar ready to let him go. 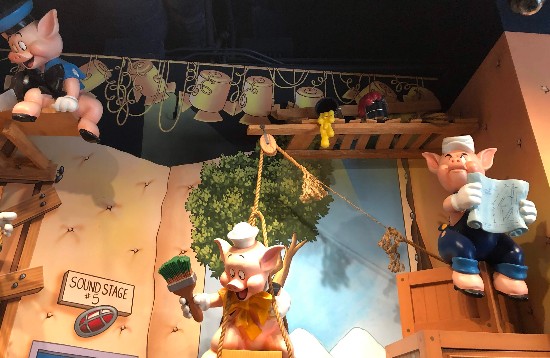 The transition between these two designs is the Three Little Pigs and the Big Bad Wolf setting up a scene. This is also where the check stand is which makes it a central part of the store. I like to think that the first half of the store is everyone making the movie and the back half is samples of finished products. 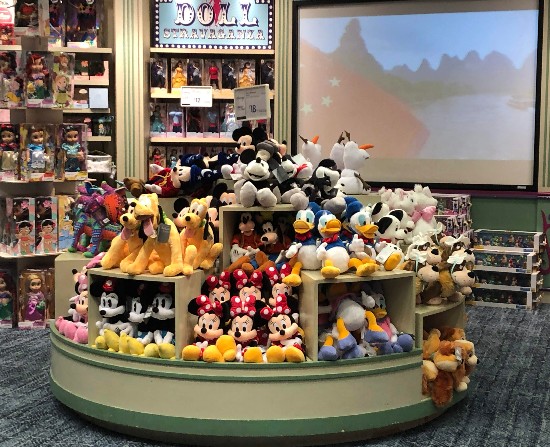 Overall store layout is similar to every other Disney store, but there are little reminders of the past. Instead of a tower of plushes, there is a smaller display in front of the screen that plays clips and advertisements. 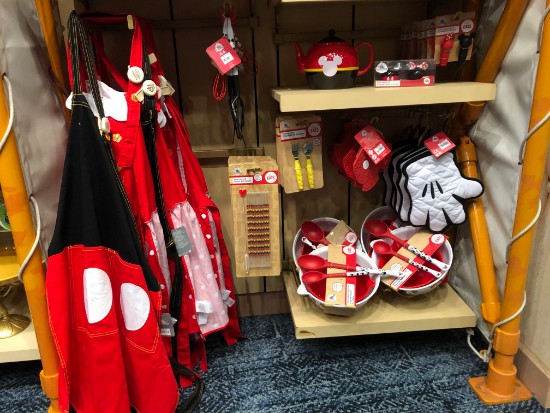 The Disney Store in Newark is definitely worth a visit. It is a good size which means there is a variety of merchandise to choose from. In the summer of 2019, there was an entire section dedicated to cookware.

Cast members at the Newark Disney Store are friendly and really know their Disney. Everyone seemed to be happy to be there and were extremely welcoming to everyone. Cast members do tend to offer excellent customer service in all Disney industries, but there was something more personable about these ones. 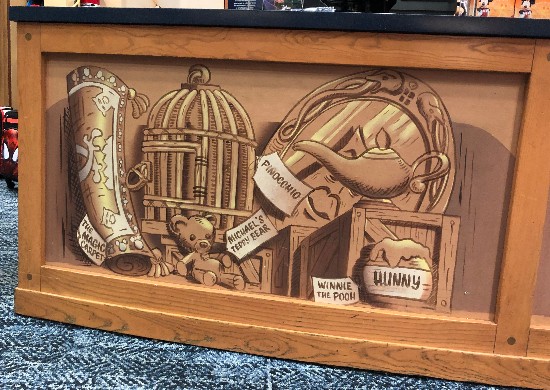 When I asked about the store design, one cast member walked around with me to point out hard to miss details. For instance, the check stand has depictions of different props and supplies from different films like the Magic Carpet from Aladdin and Michael’s teddy bear from Peter Pan.