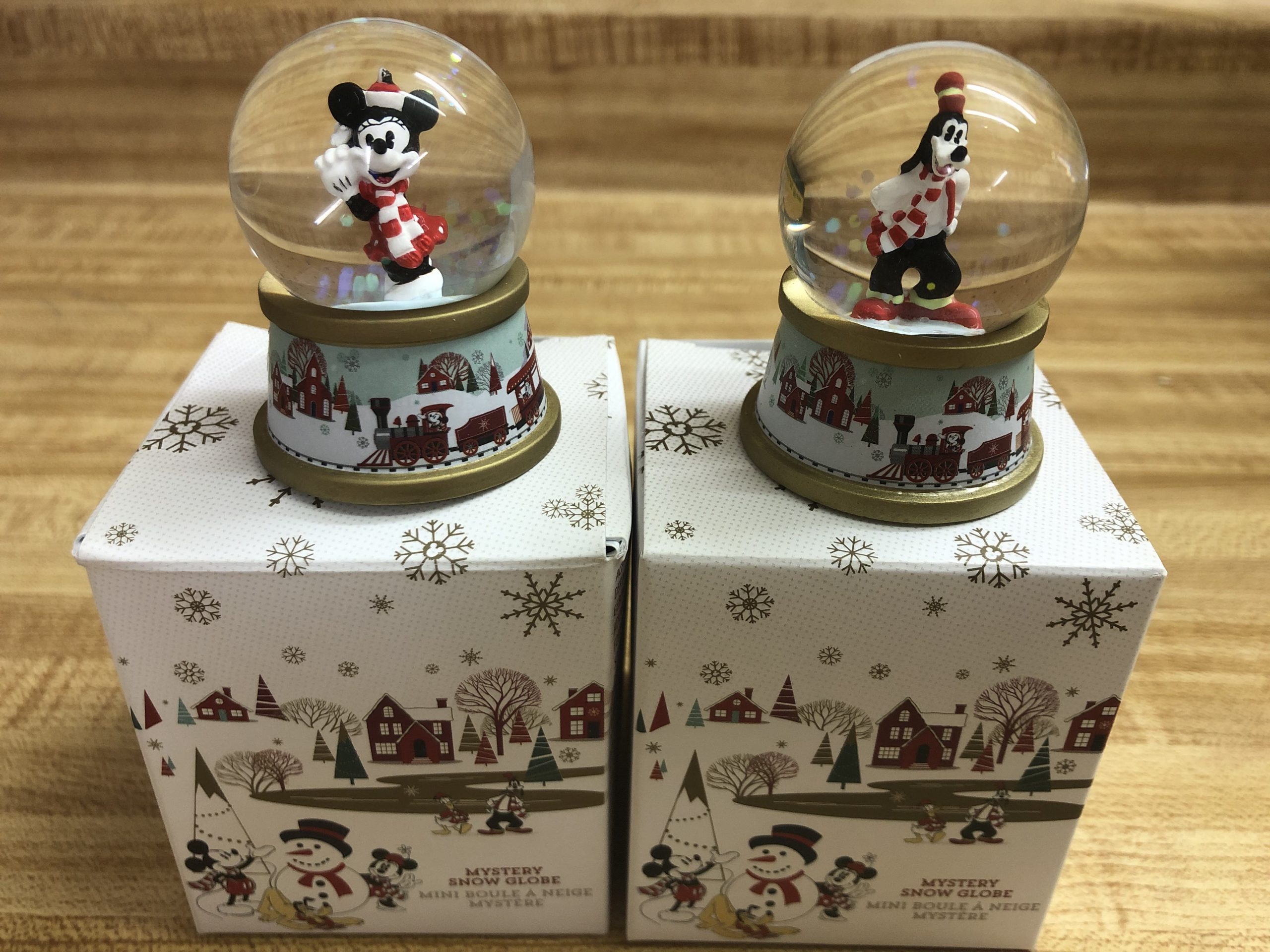 Posted at 21:47h in Disney Store by Ellie 0 Comments

Christmas time is here! And if there is one place that goes all out for Christmas, it’s the Disney Store. There are tons of new items coming in for everyone on your list. From decorations, toys, housewares, and collectibles, the Disney Store is a paradise for every Disney fan that loves the holidays. One of the newest trends for this season is the Mystery Mini Snow Globes at the Disney Store. 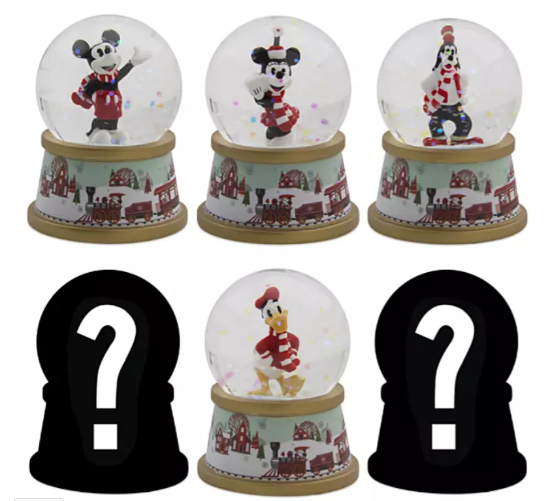 Snow globes are often keepsakes that people tuck away throughout the year and then proudly display during the holidays. Disney has manufactured its fair share of snow globes over the years. What sets these two-inch snow globes apart is the mystery gimmick and the level of detail in such a little trinket.

What Characters Are Included In the Mystery Mini Snow Globes?

With this being the first set of mystery mini snow globes, it only makes sense for it to focus on classic characters:

Mickey is seen proudly standing in the middle with his arm outstretched for a wave. He is prepared for his snow globe with a red and white scarf. He has a classic look that allows him to fit in well with any other Christmas display.

Minnie Mouse is sweetly holding her hands to her face. She is matching Mickey with the red and white scarf but also has a red and white flower hat similar to her original design. The classic red and white polka dots fit well in the snow globe. 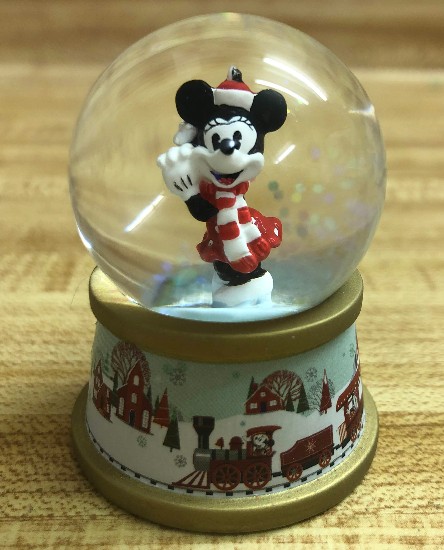 In the same classic style, Goofy is in his signature stance. Even though he is in the same red and white colors as Mickey and Minnie, his hat and shoes set him apart.

The last of the known Mystery Mini Snow Globes is Donald Duck. Although he is wearing his usual sailor hat, it is painted red to match a red sweater. Just like the others, he is donning a red and white scarf.

What Are The Chase Figures In The Disney Mystery Mini Snow Globes?

Typical Disney to leave you wanting more. The four main characters are known to be featured in this set, but there are two unknown chase figures. It is safe to assume they are other classic characters to go along with the set. In fact, one of them is featured on the front of the box.

What’s Mickey Mouse without his faithful pup, Pluto? And frankly, this snow globe is the epitome of adorable. Pluto is wide-eyed with his ears sticking up. He is wearing a Santa hat and has a small piece of holly attached to his collar. His face gives the impression that he is excited about the season.

The final chase figure includes our favorite chipmunk pals, Chip ‘n’ Dale. They are not dressed for the occasion like the rest of the snow globes but are excitedly holding up holiday gifts.

I liked how these chase figures are just a little bit different from the rest. Mickey, Minnie, Donald, and Goofy are almost washed out with red and white. Pluto and Chip and Dale have their regular coloring and stand out from the rest. They would make a great center if you had all of these out for display.

Can You Return A Disney Mini Mystery Snowglobe If You Don’t Get The One You Want?

Have your eye on a specific snowglobe in this set? If you are hoping to buy up a few and only keep the one you want, you might be out of luck. Disney Store’s return policy is clear cut in that you cannot return mystery sets once they are opened. Since there is no way to tell which figure you will get, it is merely a luck game unless you blame on buying on the entire box. 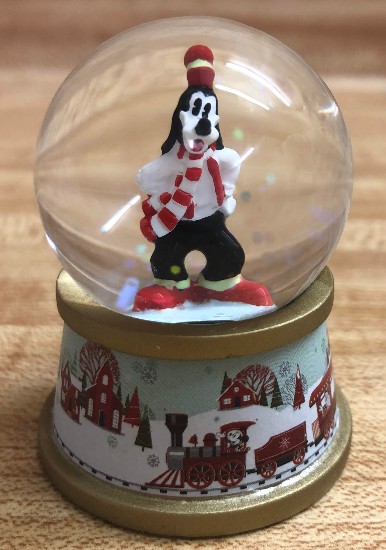 How Much Are The Mini Mystery Snowglobes?

When purchasing a mini mystery snow globe at the Disney Store, each one will cost $9.95. However, you can save yourself some time and money by looking through some eBay listings. Some sellers will buy some of the snow globes and sell them through eBay at a markup.

Although this is a controversial practice, a lot of the listings have a reasonable markup. If you know you only want a Pluto snow globe, you could buy one on eBay for $12.99 without needing to spend more money to guess and check the boxes.

Are Disney Mini Mystery Snowglobes Worth It?

As someone who loves Christmas, I was excited to check out the mini snowglobes. I opted to buy two at first just to check them out. I got a Minie and a Goofy snowglobe. At first, I was really impressed and thought they were adorable. Upon further inspection, the figures inside are not the greatest of quality. They sort of blur together in a mesh of red and white.

I really like the detail on the bottom with the train set. It ties the snowglobes together very well. My only complaint about the base is that there is a seam line on the back. 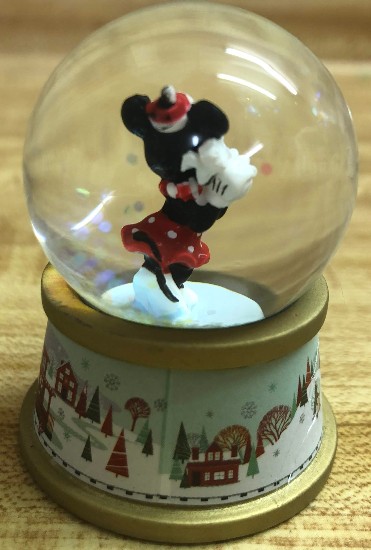 As cute as these are, I would expect higher quality at $9.95 a piece. For that reason, some people may be disappointed. However, the concept is great and I would love to see the Disney Store expand these out.

This is the first set of mini mystery snowglobes and you can get them from the Disney Store online here. It is too soon to tell if these will make a comeback in future seasons; however, Disney Store does tend to introduce new mystery sets when they are successful. For instance, the Disney Animators’ Collection Littles Mystery Micro Figures just closed out on their 11th wave.

As someone who loves Disney and Christmas, I hope the Mini Mystery Snow Globes became an annual tradition. It would be awesome if each year focused on a different Disney classic.

Do you have a favorite Disney Christmas collectible? Let us know in the comments below. Season’s greetings!