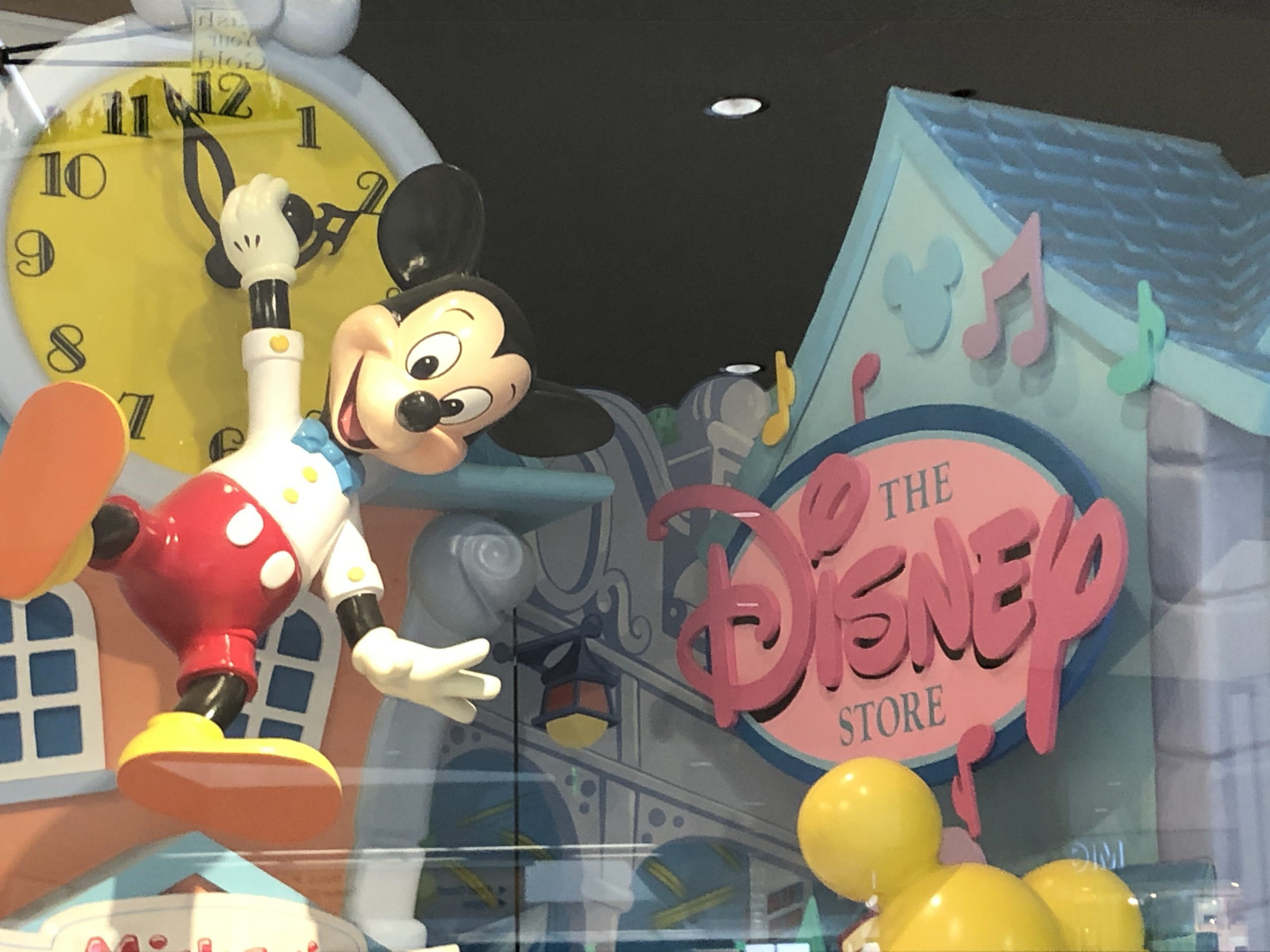 Santa Rosa, California is well known as being a “Peanuts” town. Peanuts comic strip creator Charles M. Schulz called Santa Rosa home from 1969 until his death in 2000. His legacy lives on throughout the charming city with statues featuring the beloved characters and other nods. But this is not a post to talk about Peanuts. Recently, I visited Santa Rosa and naturally checked to see if there was a Disney Store. To my absolute delight, not only was there a Disney Store in Santa Rosa, but it is a pink and green store!! This Disney Store in Santa Rosa review will give you a helping dose of nostalgia for all you 90s kids. 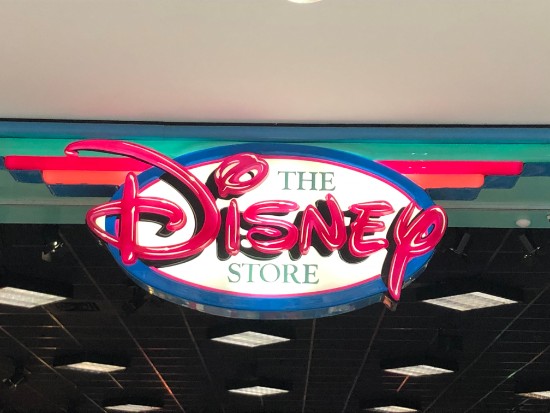 Where Is Santa Rosa?

Santa Rosa is located in Sonoma County, which is affectionately referred to as Wine Country. But don’t think you need to be into wine in order to enjoy Santa Rosa. There is so much do here. As previously stated, the city has lots of Peanuts-themed events and is home to the Charles M. Schulz Museum. There are unique restaurants and breweries for literally everyone.

This Northern California town also has some ties with Disney. The “Inky the Crow” episodes of The Wonderful World Of Disney were filmed in Santa Rosa, and its McDonald Mansion landmark was used in the film “Pollyanna.”

The Disney Store is located at the Santa Rosa Plaza Mall. It’s right off of US Highway 101. There are a few malls around Santa Rosa, but the Plaza Mall is the only one with a Disney Store. In addition, the mall is anchored by Macy’s and Forever 21. For the best parking, use the entrance on A Street near Forever 21.

Step Into Your Childhood At The Disney Store in Santa Rosa 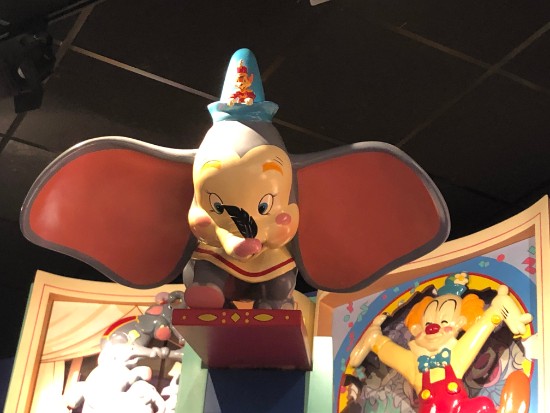 These older Disney Stores are called “pink and green” after their dominant colors. Every Disney Store has this design in the 1990s, so many get nostalgic when they see one. Some refer to it as the film reel design because of the Mickey Mouse film reel border. But it is more than just the colors that make pink and green stores so fun. There are statues all over the store of lovable Disney Characters. In the storefront, there was typically a display featuring the Fab Four: Mickey, Minnie, Donald, and Goofy.

As Disney transformed over the years, The Disney Store changed with it. There are three main designs you may find. The pink and green is the rarest as many stores have been through remodels that abandoned the design.  Pipe rail stores can still be found, like in Newark, California. These stores had railings incorporated in their design to look like a film studio. The most modern design is the current Imagination Park, which turns going to the Disney Store an experience. 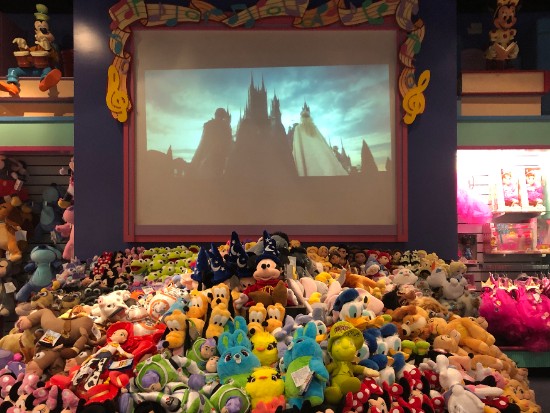 When I got to the Santa Rosa Plaza Mall, I was not sure where to park so I entered the mall through Macy’s. Once I got past the perfume counters and entered the mall, I was somehow able to spot the entrance to The Disney Store instantly. All I could see what a small corner of the purple Disney writing. As much as I love Disney Stores of any kind, I get a different feeling when walking towards a pink and green store. Suddenly, I’m six years old again and I can almost hear my dad telling me to slow down as we approached.

I started to take some photos, and then I felt a tug at my heart. The storefront display was different than my Fairfield store. Instead of the Fab Four gathered around a piano and playing music, the Disney Store in Santa Rosa features our favorites hanging around Mickey’s Toontown and their version of a Disney Store. It is simply adorable.

I was a little disappointed to notice the wear on some of the statues. They are likely over 25 years old, so of course, they may have some worn pieces. But Goofy was missing an entire ear! When I first glanced around, I also noticed that hardly any of the statues moved. Back in the day, many of them would twist and turn as if they were engaged with the setting around them. The movements are simply a memory in Santa Rosa, except for one. I did not notice at first, but a cast member let me know that Tinkerbell still had some pixie dust left.

What’s Different At The Disney Store In Santa Rosa?

Although I was slightly disappointed that my favorite element of the pink and green stores looked a little aged, that completely disappeared once I let myself immerse into Disney nostalgia. I found myself checking out the border statues all over the store. I noticed some different pieces compared to the Fairfield location. The check stand is practically an homage to Beauty and The Beast. The rose is centered at the registers and Belle, The Beast, and their pals are all over the store. 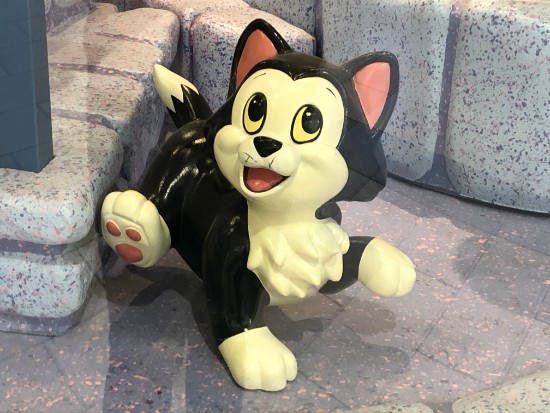 There were some little nods here and there that some may miss. For instance, Figaro is featured in the storefront display. It seems that many argue whether or not he is Minnie’s or Geppetto’s cat. Either way, he looks so stinkin’ cute in this display.

The Disney Store In Santa Rosa does have a counter in the back of the store. It is not as elaborately decorated as the main registers, it appears to be a backup register. The cast member said it is not really used for anything except for some Disney Store events, but I wanted to include some photos in case you remember your childhood Disney Store with these counters.

My Disney Store has golden Mickey statues, but the Santa Rosa Disney Store had these Mickey lamps. I loved the look since they look like they could be paper lanterns.

Is It Worth A Visit?

YES!! For one, you can never go wrong with Disney customer service. The cast members at this location were some of the best I have ever encountered. Everyone was greeted warmly and informed of the latest offerings. I noticed that every time a cast member was talking to a customer that it seemed like they were good friends. I experienced this when one cast member complimented my Up loungefly backpack. You can tell that the employees here love Disney and love their job. 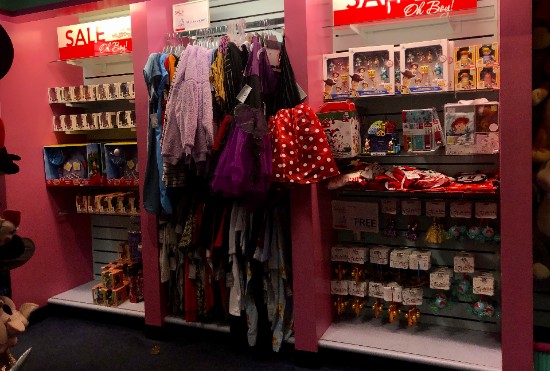 My only real complaint with the Disney Store In Santa Rosa is that the clearance and sale section is pretty small. I was unable to find any theme park items, but that is not unusual for a Northern California location. Occasionally, you can find a few items. Overall though, it was extremely limited on selection. I did pick up some adorable Disney Dog journals from Oh My Disney, so that is a definite plus.

If you are looking to get a blast from the past and check out the latest Disney merchandise, the Disney Store In Santa Rosa is an excellent choice. Santa Rosa is an amazing city in itself, but all Disney fans need to check out this wonderful spot when they are in town.