Toy Story 4 Merchandise At Target Is Dominating The Entire Store 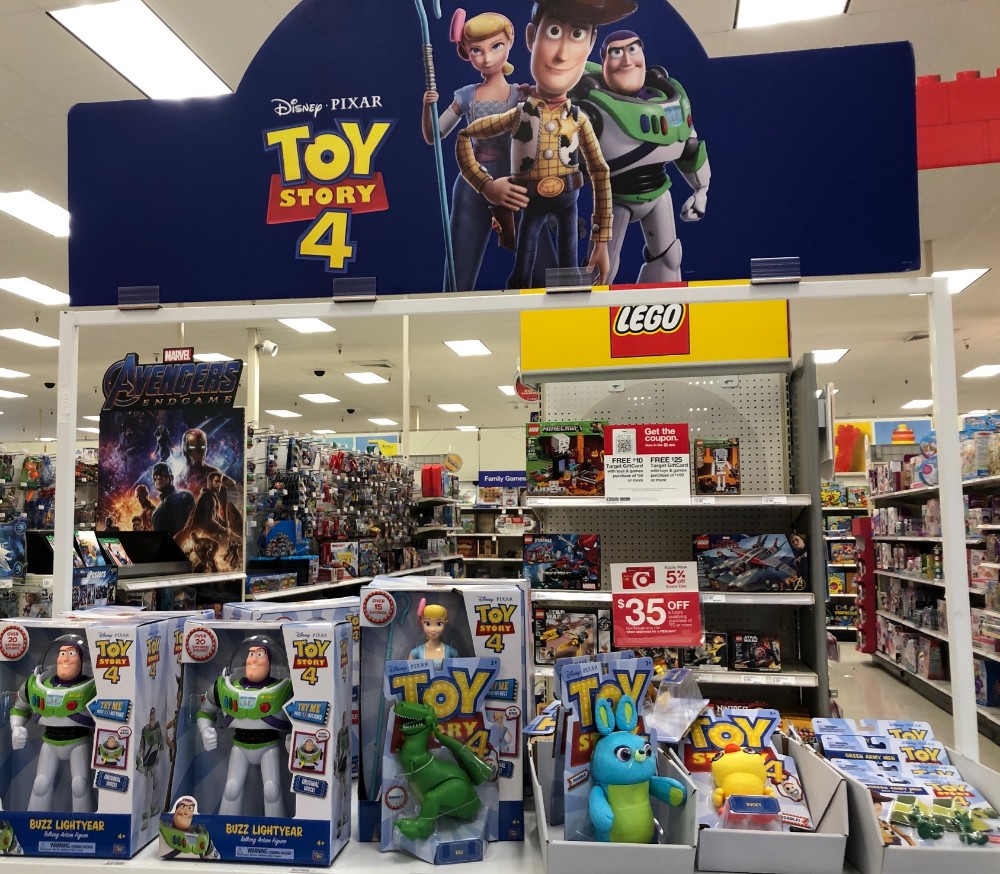 Get Ready For Toy Story 4 At Target

With any highly anticipated Disney release comes the overhaul of marketing. I walked into Target to buy a few essentials and naturally found myself wandering the entire store. To my delight, I was greeted by Toy Story characters. Get hyped with new merchandise for Toy Story 4 at Target.

Toy Story 4 is upon us and Disney marketing is at its finest! There seemed to be photos of Andy and Bonnie’s favorite toys everywhere. From the entrance to the Toy Story branded Goldfish crackers in the grocery section. Target is filled with Toy Story 4 vibes! Not Just The Toys Are Celebrating Toy Story 4 At Target

Toys are the most easily integrated merchandise for Toy Story as fans of the franchise can have their own Woody or Buzz. Part of the fun of Disney marketing is seeing the different ways Disney puts out its image on things other than toys.

Surprisingly, the discoveries at my local Target were pretty basic integrations on different products. I am certain that there are other stores with various kinds of products, but these were the few things I found at my local Target.

Goldfish Crackers put out Toy Story 4 crackers with Woody, Buzz, and Bo Peep grazing the cover of the package. The crackers themselves are the regular cheddar flavor and contain orange and black fish with Woody’s and Buzz’s faces.

The weirdest find was Good 3 Grow Apple Juice that had Buzz’s head on top of the bottle; however, these might not be specific to Toy Story 4 as there were other characters featured too like Iron Man. Toy Story Plushes For Every Fan

Disney did not skip out of providing fans with a wide assortment of choices for Toy Story 4 toys. Target had an entire aisle, two end caps, and a cart that was filled with tons of different toys. From plushes to high tech, there is something for every Toy Story fan of any age. Disney could easily just put out a couple of plushes of each character and sell them exclusively at Disney store. At Target, there were so many choices!

The first type that caught my eye were these rounded plushes that show our heroes without necks, legs, or arms. From what I saw, there was a Hamm, Woody, Jessie, and an Alien. They’re small and squishy and would make nice desk ornaments or dashboard pals. Other plushes included a basic version of Buzz, Woody, and Bo Peep that also talk. While their faces are not screen accurate, they are perfect for the Toy Story fan that might be old enough to handle plastic toys with breakable pieces. Get Your Own Woody or Buzz That Is Just Like Andy’s!

If your child or child at heart longs to own Andy and Bonnie’s toys, you can easily swing by a Target and have quite a few choices. There are versions of Buzz and Wood that are marketed as their toys, not necessarily as a Toy Story 4 toy. The corner of the package in the lower left labels them as “Toy Story Signature Collection”. Other than that, the package is displayed just as it would be in the films. The Buzz Lightyear comes in a similar package as the one Andy received on his birthday in 1995.

One nice touch for the die-hard fan is that the back as a cartoon picture of Buzz giving his speech declaring his purpose of protecting the galaxy “from the Evil Emperor Zerg, sworn enemy of the Galactic Alliance.” It also has all the same features shown in the Buzz Lightyear commercial from the film, and you can test out a few of the features right there in the store. For Woody, it is as screen accurate as it can get. You can test out the pull string to hear some famous Woody phrases like “there’s a snake in my boot!”

Both Woody and the Buzz toys come with a certificate of authenticity. Whether you want to pretend to be Andy, or are more like Al and want to maintain the ultimate Toy Story collection, swing by Target to pick up your own Woody and Buzz. While Buzz and Woody have the most authentic presentation, other beloved characters are available that are screen accurate. They are just very clearly “Toy Story 4” toys rather than an original concept toy.

I first noticed Mr. and Mrs. Potato Head. Produced by Playskool, but with a Toy Story 4 logo, each toy comes with screen accurate accessories that are removable just like a regular Potato Head. Also, you can pick up a genuine RC Free Wheel Buggy. Although it is not a remote controlled car, it does have push and go action which means you won’t need to worry about batteries or a hefty price tag. With some old favorites, we are also introduced to some new characters in Toy Story 4. Ducky and Bunny were some of the first new faces we saw in the Toy Story 4 teaser trailer. Voiced by Keegan Michael Key and Jordan Peele, these characters certainly seem to come with some high expectations because there are a lot of choices for Ducky and Bunny toys.

You can get both of them as a set where they stick together so they won’t become separated, and they are scented like cotton candy. An Adorable Bullseye You Can Only Find At Target

Target is known coming out with exclusive merchandise for different franchises, and Toy Story 4 is no different. This Bullseye is only at Target and is one of the most screen accurate I’ve seen outside of a Disney store. He is plush and flexible, just like the movie Bullseye and can make sounds when you press his neck. For $34.99, he is durable but his plush built will make it difficult to put him on display. Dress Up As Your Favorite Toy Story Character

While some fans want to be able to play with the toys, others dream about being the toys. For the fans that want to be just like Woody, Buzz, or Bo Peep, there are interactive and sometimes wearable toys to make that a reality. The Buzz Lightyear Space Ranger Armor has a button-activated visor that can protect your little space ranger. Plus, it comes with buttons to bring the Buzz Lightyear fantasy to life. Your child may be disappointed that the wings do not eject very far, but this is a much safer option as you won’t need to worry about your child bumping into household furniture or other people. Many fans are excited about the return of Bo Peep in Toy Story 4. In Toy Story and Toy Story 2, she was merely a background character and Woody’s deepest admirer. Our hearts crushed with Woody’s when he reveals in Toy Story 3 that she was separated from our friends. Not only is Bo Peep back for the new movie, but she has a whole new look.

There are tons of action figures and plushes featuring this new design, but one thing that stood out was the Bo Peep Action Staff. Bo Beep will be more than a background character in the new film. The Action Staff is just over three feet tall and has lots of sound effects. It does require adult assembly, there are not any tools that are required to put it together.

Meet The New Faces Of Toy Story 4 At Target

From what we know from the trailers for Toy Story 4, we are going to be introduced to lots of new characters. Notably, we know that the plot is going to center around Forky, a toy Bonnie seemingly puts together at school and immediately bonds with. Forky is featured on so many new toys, included his interactive toy with googly eyes and moving feet. He has lots of saying and even humms and dances. In addition to Forky, we will also meet Duke Caboom and there is a pull and go toy available at Target for those curious about this new toy. Check-in with The Mouse Stops Here for the latest in Disney merch updates!