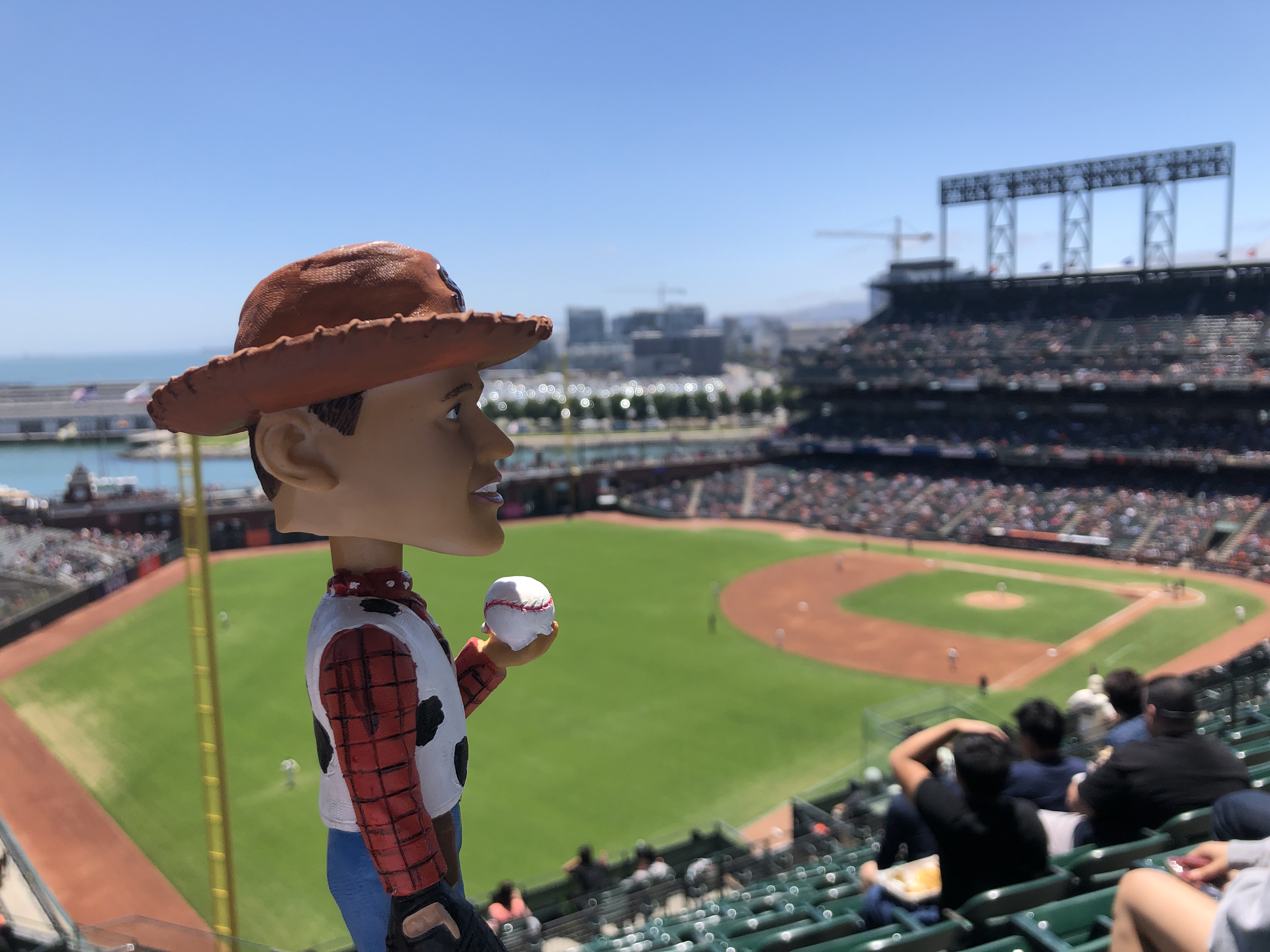 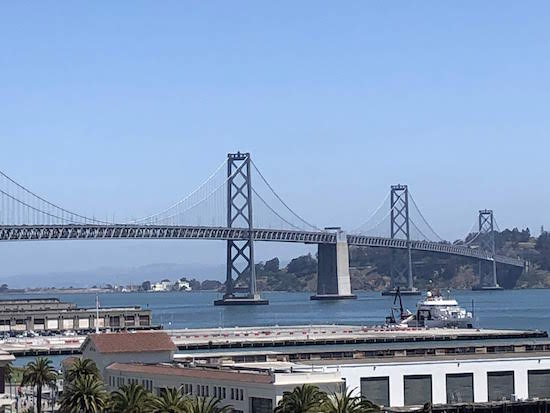 Pixar Day started in 2014 when the San Francisco Giants played the Washington Nationals on May 20th. Your special event ticket got you the game and access to a pregame party in Seals Plaza with Pixar filmmakers.

In addition, Mike Wazowski and Sulley were there for photo opportunities and John Lasseter threw out the first pitch. The souvenir for the event was a Pixar and Giants-themed t-shirt featuring Mike and Sulley.

For the first ever Pixar Day, the Giants pulled out all the stops. It probably helped that Monsters University was set to be released in theaters just one month after the event. Since then, Pixar Day has had less to offer.

The pregame parties stopped in 2015 and Pixar filmmakers were less frequently in attendance. The biggest draw was exclusive Giants and Pixar statues and figures. Each year had some special offer including: 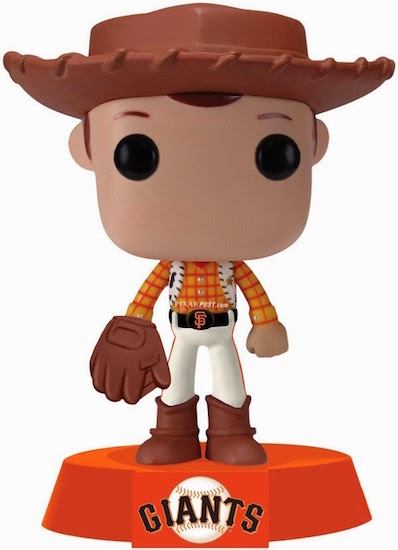 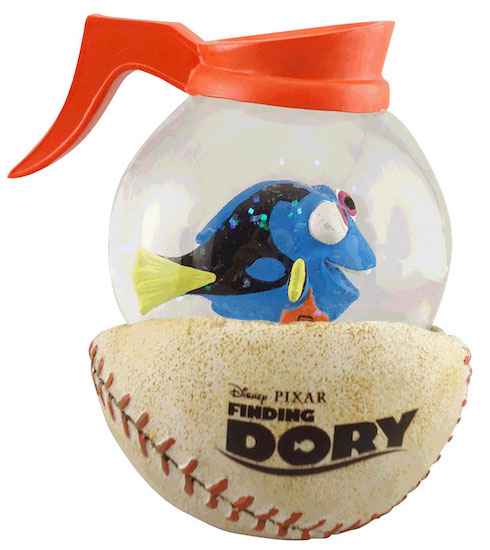 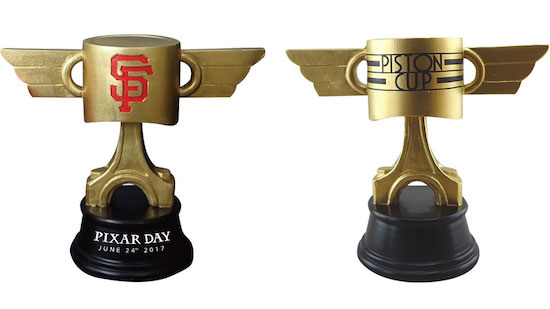 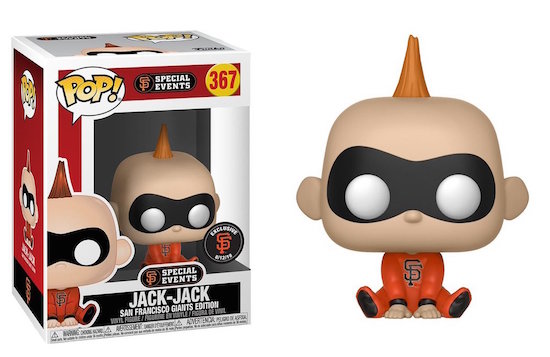 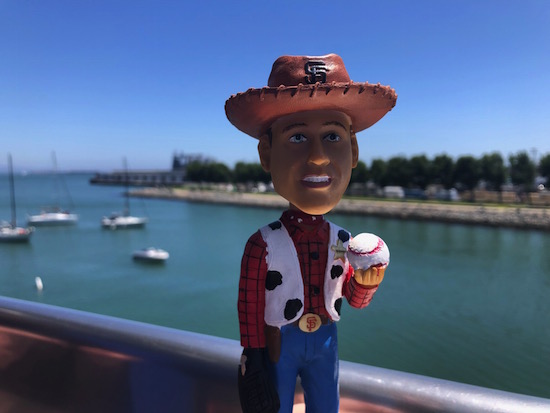 Each Pixar Day coincided with a Pixar release. The biggest Pixar movie this year is undoubtedly Toy Story 4. It seems a little out of place that the giveaway is less Pixar centric than before.

But the Kirk Reuter “Woody” Bobblehead is pretty high quality. Plus, he talks! You can hit a button on the base and hear the Giants’ Woody say, “This ballpark isn’t big enough for the two of us.”

It is an excellent gift for the diehard Giants fan who likes Pixar. However, if you are a diehard Pixar fan who likes the Giants, you might not even know who Kirk Reuter is. The giveaways in previous years were more focused on Pixar characters than Giants players.

What Are The Pixar Day Options? 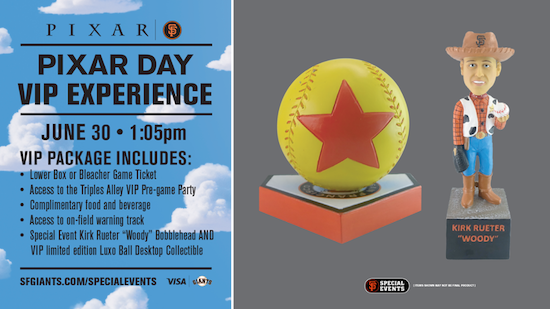 If you wanted some extra perks, you could pay an additional fee for the Pixar Day VIP Experience in Triples Alley. Triples Alley is known around Oracle Park as an area that is notoriously difficult to hit a home run. The ball will frequently bounce and result in a triple instead of a home run.

You can opt in for a Triples Alley ticket at any Giants home game. Not only do you get a private entrance, but you also get to attend a pre-game party with complimentary food and drink (including beer and wine) two hours before game time.

This special ticket gets you everything a standard ticket would, but also access to the Triples Alley VIP party, access to the on-field warning track, a Q&A with Kirk Reuter, and an additional collectible. The VIP collectible is the Luxo ball designed like a baseball sitting on home plate.

The Wonderful Staff At Oracle Park

I have been to sporting events where the employees seem grumpy. Or maybe a little over the top excited to a point where it becomes inauthentic.

The employees at Oracle Park are genuinely friendly and seem like they are happy to be working with the San Francisco Giants. From the security screening to the cashier for garlic fries, every person greeted us with a smile. You feel the positive energy the moment you walk in. 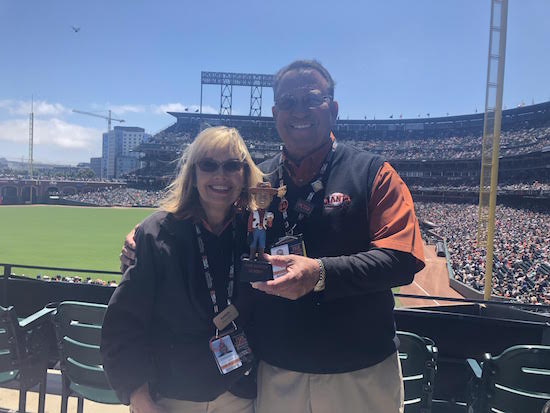 How Much Pixar Is At Pixar Day?

When we first got to the ballpark, there was not much mention of Pixar Day. In fact, there was very little indication of it beyond fans wearing their Giants hats and Pixar character t-shirts. 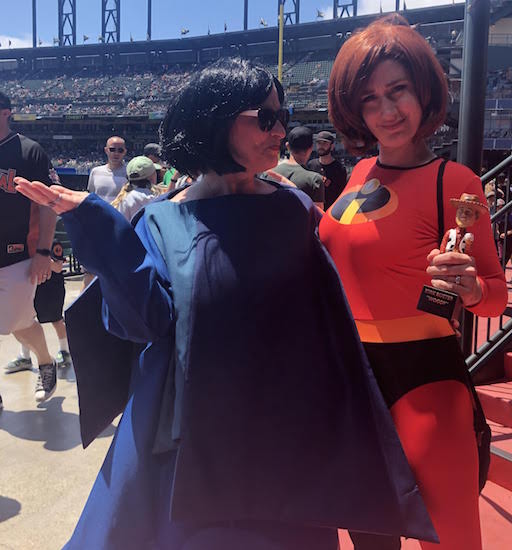 Giants fans were definitely in the Pixar spirit. There are people dressed up in Pixar themed clothes and costumes.

Kids and kids at heart brought their toys along with them. I saw a few Buzz Lightyears and quite a few Bunny and Ducky toys roaming around. 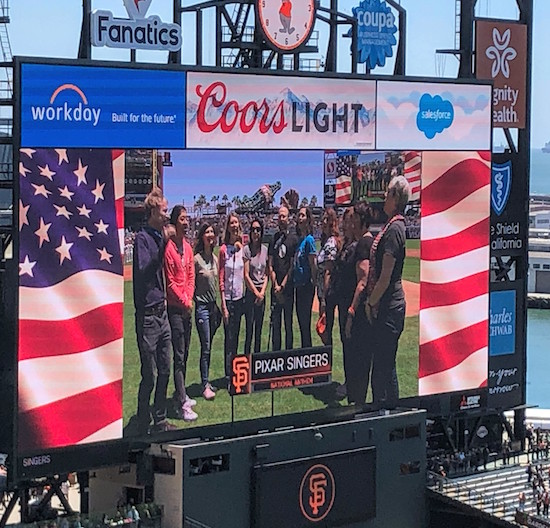 After the usual pregame rituals, the Pixar Singers performed the National Anthem. This group has performed at other San Francisco Giants Pixar Day, including this 2016 performance.

With such a large selection of Pixar scores, I assumed we would hear a lot more Pixar music. Either through the organ or just played over speakers.

Not only was there not very much but often it was a song from a Disney movie, not Pixar. During a batting change, the organist played “Friend Like Me” from Aladdin.

I did find a little bit of San Francisco merchandise that includes Mickey Mouse. This display case showed everything Mickey that you can buy from the Oracle Park shops.

Keep in mind that the hat and t-shirt were only available in youth sizes. If you won’t be at Oracle Park any time soon, I did find the All Star bib and this beach towel available for purchase online.

Should I Go To SF Giants Pixar Day?

If you love baseball and Pixar, then Pixar Day is a perfect fit for you. It has little bits of Pixar incorporated throughout the game.

Plus, if it continues, you get to watch a Pixar film in the ballpark. With Pixar Day occurring during an afternoon game, it is also a great fit for families.

As a fan of both baseball and Pixar, I was a little disappointed. I wanted to see more Pixar included throughout the game rather than just small pieces. In writing this blog, I discovered that previous Pixar Day events were much more integrated. I would have liked to have seen Pixar characters like they have had before.

At the very least, the video clips played during commercial breaks could have been more Pixar centric. Interviews with coaches and players touched on Fortnite and other popular topics. It would have been fun to hear the players’ favorite Pixar movies.

While June 30th was the San Francisco Giants Pixar Day at Oracle Park, there are plenty of other Disney centric themed nights coming up. They already hosted their first Marvel night on May 22nd.

It was so popular that they will be holding a second Marvel Night on August 8th. Even still, the Giants will also host a Star Wars day for the 9th year running.

Keep checking in for updates on the latest Disney events. You can read about my experience at the Toy Story Marathon here. Catch you later!

You can also check out my live blog from Pixar Day below:

Every major sports team seems to be hosting themed nights related to our favorite Disney franchises. Special tickets for San Francisco Giants Pixar Day gets you access to the game, a post-game screening of Toy Story 3, and a Kirk Reuter Bobble Head. Kirk Reuter was a pitcher for the beloved team that was affectionately called Woody.

Despite being called “Captain Kirk” earlier in his career, fans and teammates alike started called him Woody after the success of Toy Story due to the resemblance. Naturally, his bobblehead likeness is in a Toy Story Woody outfit.

Today I’ll be live-blogging the event from Oracle Park. I’ll update on all the Disney and Pixar tie-ins. Every major sport has been incorporating our Disney favorites into their promotions.

Hopefully, this live blog will give you an idea if it’s really worth it. Let’s see where this adventure will lead us today! 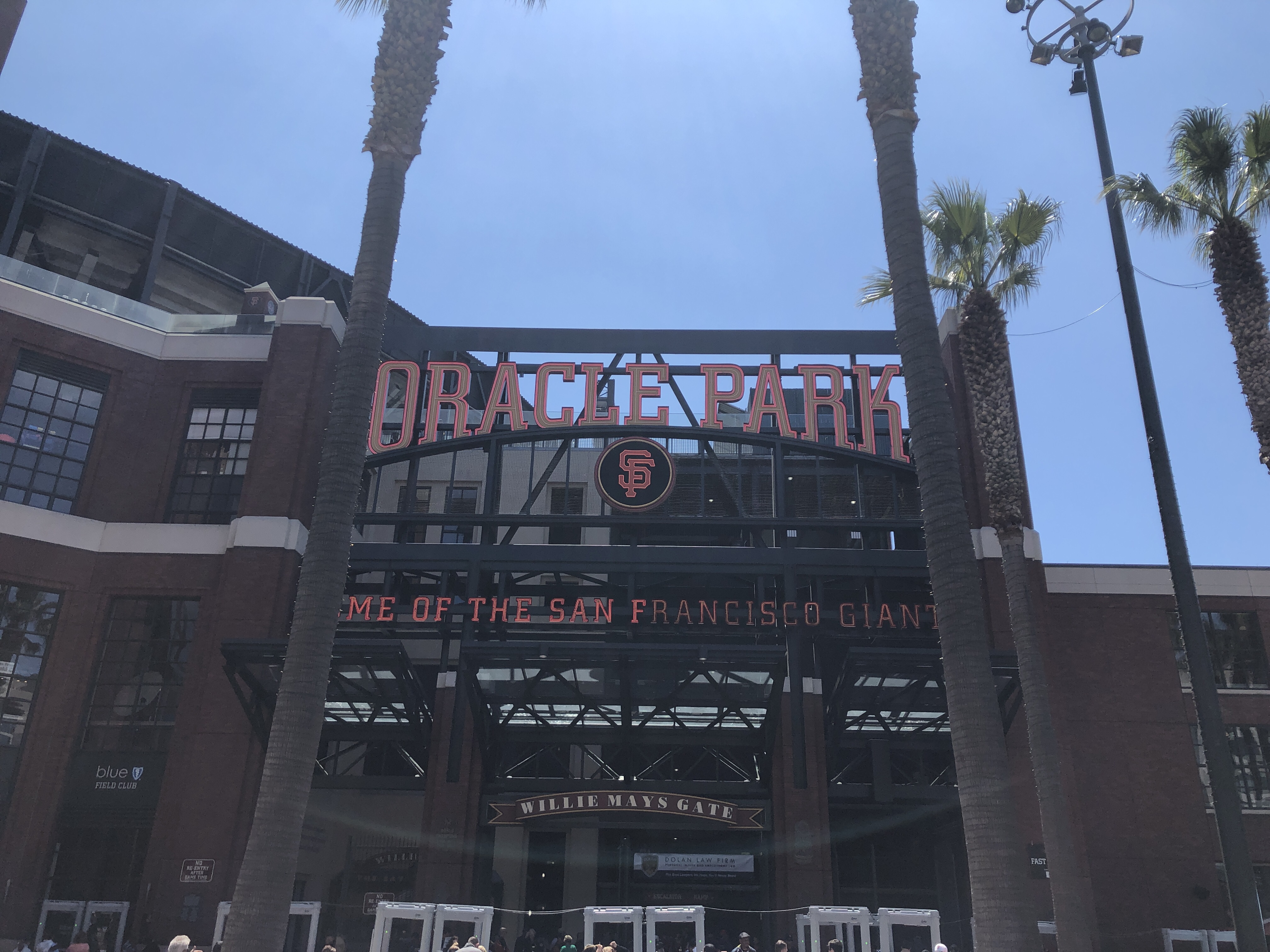 Getting to the ballpark today was fairly easy despite San Francisco being a hot spot for many events today. Once we arrived, there were lots of friendly Giants employees waiting to greet us.

It also happened to be a giveaway for a Giants beanie. Since you need a special Pixar Day ticket to get the bobbleheads, you have to go to a specific section to get them.

I asked one who was to get the Woody Reuter bobbleheads and he directed me to section 317. 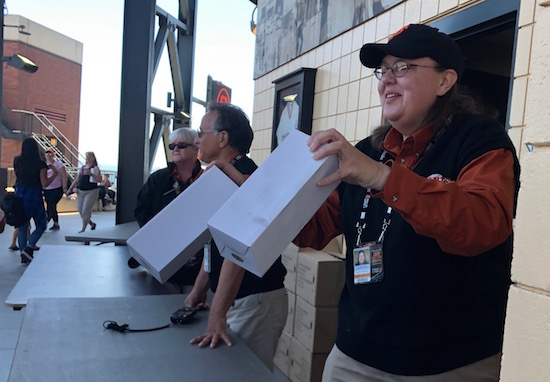 Our special ticket put us in section 332, so the bobblehead distribution would be close to our seats. When we got to 317, there were no bobbleheads to be found.

I checked our tickets and they said to go to sections 317 OR 334. So we made our way over a few more sections. Low and behold, the bobbleheads were in 334. A separate promotional email said the distribution would only be in 334.

Simple miscommunication all around, so it had no interference with our day.

As we made our way to our seats, the organist started playing Disney songs. He started with “When You Wish Upon A Star”, then went into “You’ve Got A Friend In Me.” He transitioned “Beyond the Sea” into more traditional baseball songs.

What a game! Giants have been absolutely dominating this game. As I update right now, the score is 10-1!

Throughout the game, there is just a hint of Pixar/Disney appreciation. So fans of baseball would not feel overloaded at these events. 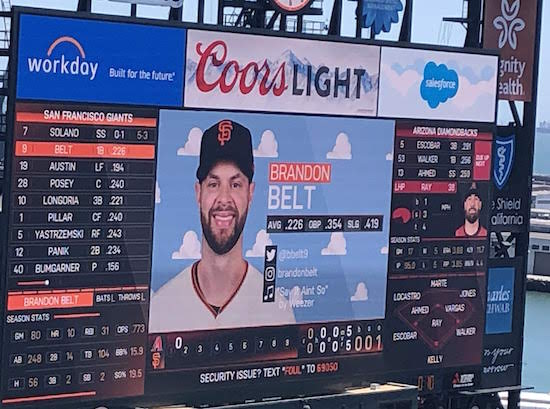 The main Pixar component is the organist playing Disney and Pixar music between batters. However, the player profiles have Andy’s room wallpaper as the background. 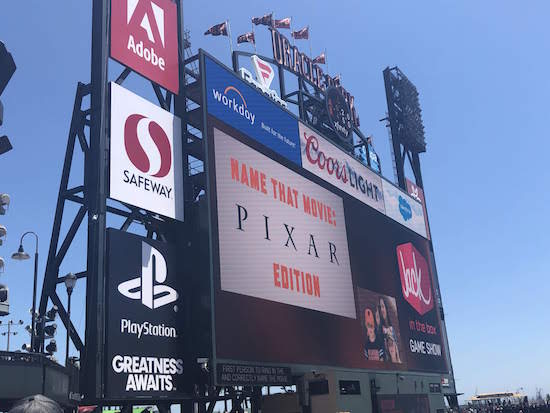 Like many other sporting events, there was a competition component between fans. A few lucky kids got to play a Puzzle game on the scoreboard. They needed to guess the Pixar movie based upon a jumbled photo. 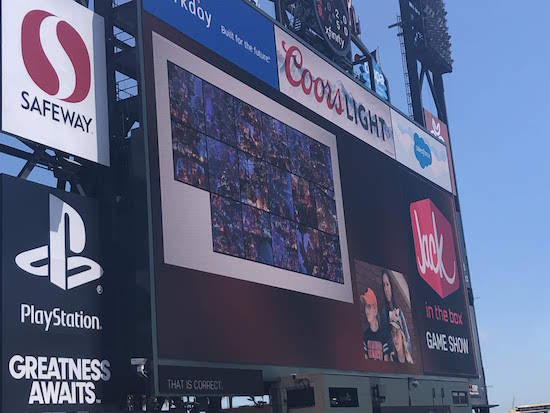 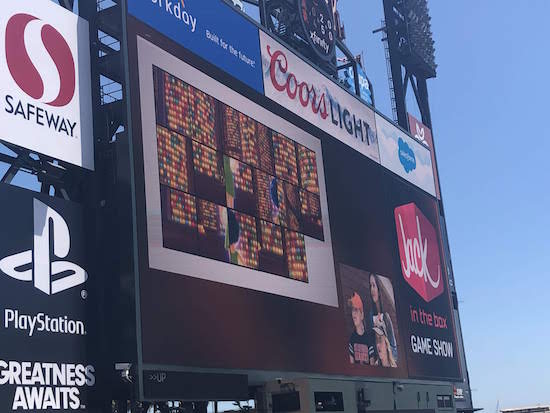 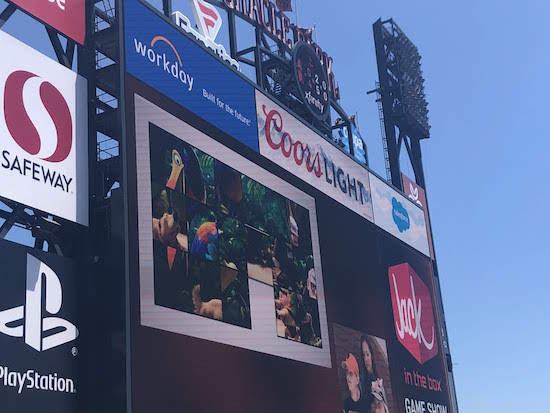 The kids had lots of help from the crowd and got all three puzzles correct. They won a Kirk Reuter “Woody” bobblehead. Can you get all three?

Even though there were only a few innings left in the game, there was still Pixar fun to be had. Before the 8th inning, a Sing-Along sign appeared on the scoreboard. 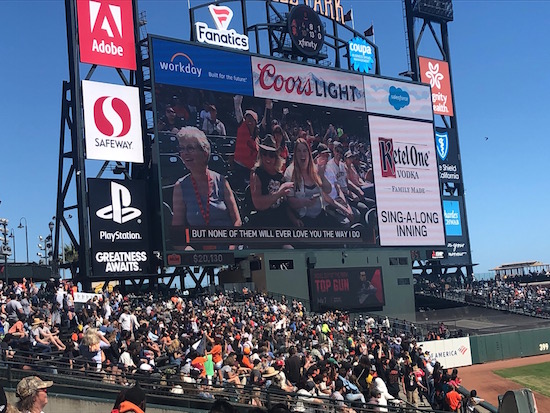 The entire crowd sang along to “You’ve Got A Friend In Me.” The words were on the screen along with shots from people in the crowd. It was a really fun moment. I wish they would have incorporated more songs throughout the game in a similar way.

The game ended with a 10-4 Giants victory.

It is tradition at Oracle Park to send fans home with “I Left My Heart in San Francisco” by Tony Bennett. As the song concluded, fans ages 14 and under were invited to run the bases.

After that, Oracle Park was ready to host a screening of “Toy Story 3.”

All in all, it was a really fun day. If you were hoping for Pixar things everywhere, you may be a little disappointed. But if you want a fun day at the ballpark with baseball and Pixar fans alike, Pixar Day at Oracle Park would be a great fit.

I’ll keep you posted on more Disney and Pixar events as they arise. I hope you enjoyed reading through my live blog. Let me know in the comments if you’ve ever gone to a Pixar Day with your local sports team. Catch you later!