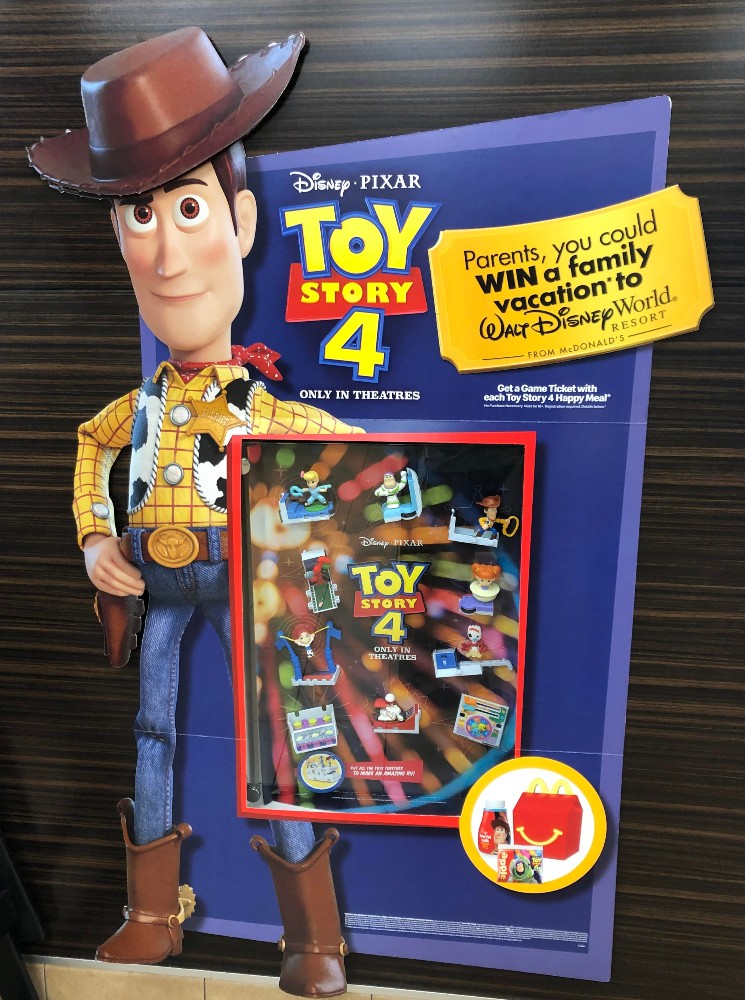 Posted at 15:17h in Merchandise, Movies by Ellie 0 Comments

Do Toy Story 4 Happy Meal Toys Live Up To The Hype?

McDonald’s Happy Meal toys tend to be a little hit and miss. I remember loving some of the toys I got as a kid and hanging onto to some of them for years. Specifically, the toys that were inside the little VHS boxes. I have noticed over the years that sometimes McDonald’s Happy Meal toys are not always the best. Depending on your outlook, there are some ethical concerns like marketing unhealthy food to children and the enforcement of gender roles when it comes to “boy” and “girl” toys.

Whatever your perspective, the fact of the matter is that sometimes the toys are lame and sometimes they are fantastic. With almost every new Disney film release, McDonald’s will launch a line of toys. For Toy Story 4, they stepped it up. These toys are not only fun by themselves, but if you collect all of them, you can make a whole new toy RV. Here’s a guide to the Toy Story 4 Happy Meal toys. 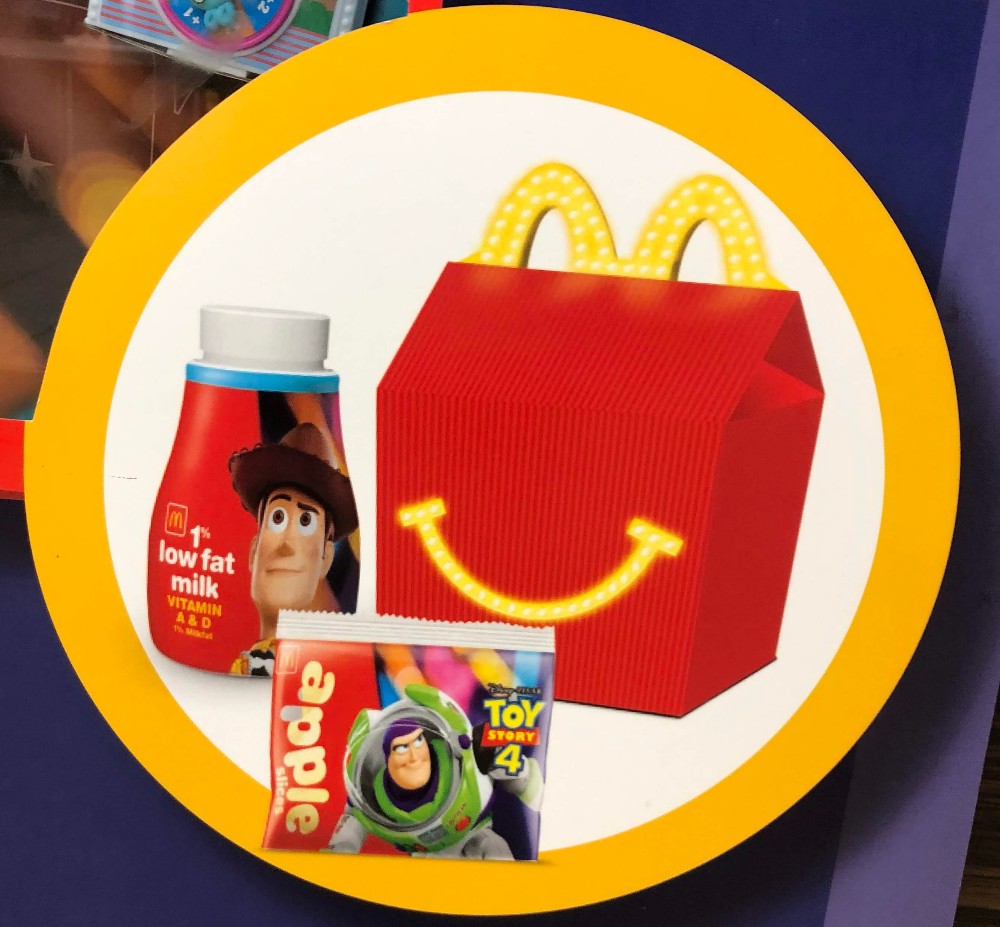 Toy Story 4 Happy Meal Toys Are More Than They Appear

Toy Story 4 comes out later this week, and one thing we know from the trailers is that our heroes will find themselves at a carnival of sorts. Before and along the way, they will encounter some new toys. Some will join Bonnie’s toys, while others may end up on their path. Each toy represents a character, or pair of characters, and a carnival game. Individually, each toy has a separate function. Since the idea is to collect all of them to assemble the RV, there are also stickers with directions to apply to each toy that will make sense once the RV is complete. 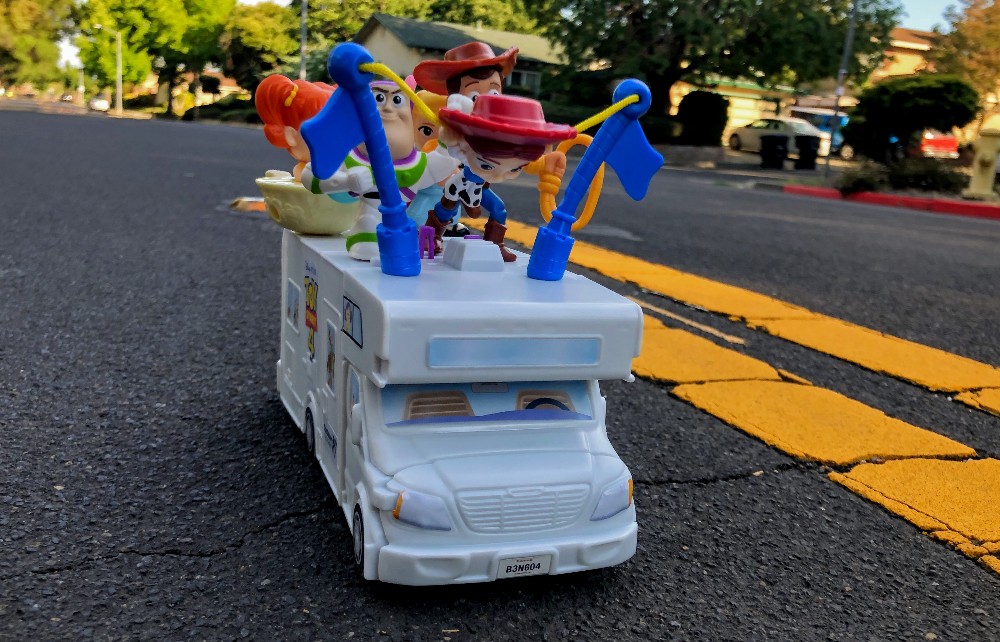 Woody is playing a dart type carnival game. The balloons are made of card stock like paper and slide into little divets. Woody can then turn to knock out the balloons. On his own, Woody is easy to assemble. He comes with six balloons, but the toy only has 3 divets for them. This comes in handy since the Woody toy knocks down the balloons with his lasso instead of throwing a dart at it. The cardboard balloons will surely become damaged after lots of use. Woody comes with stickers that are meant for the windows of the RV and feature Slinky Dog. 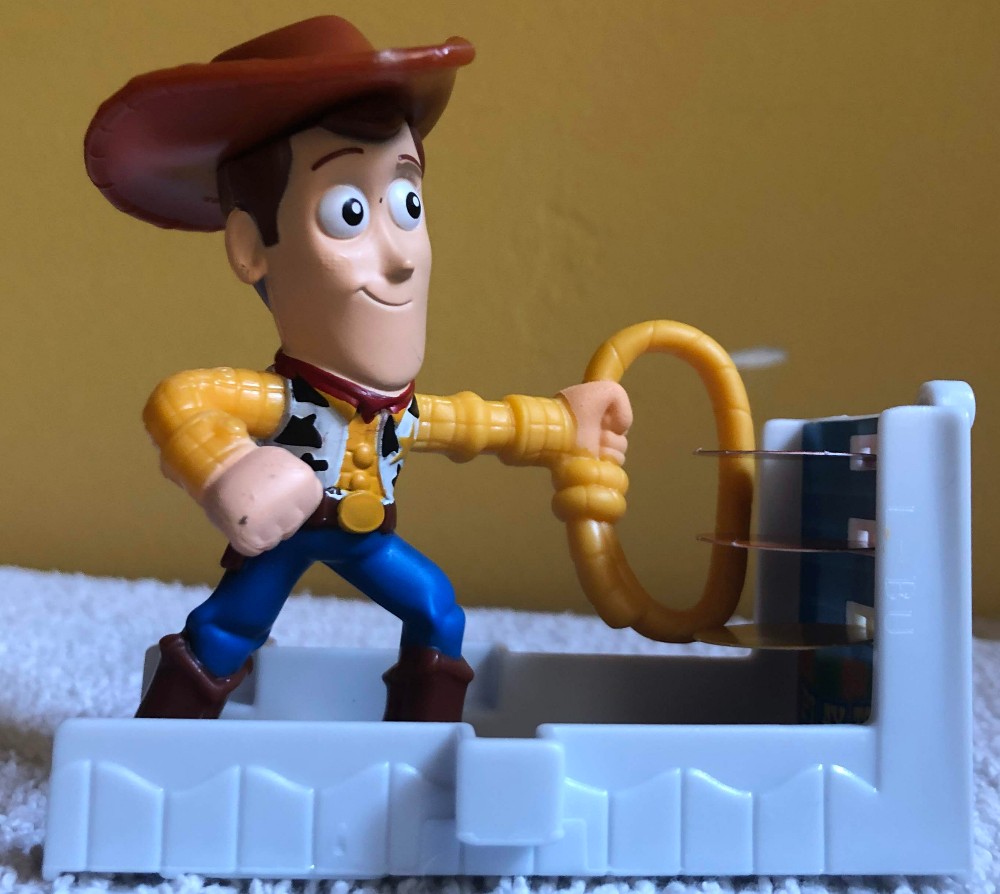 The Happy Meal version of Buzz is ready to go to infinity and beyond. Put Buzz on the peg, then hit a button to watch him fly. His toy will end up being one of the tires for the RV, and he comes with stickers that show Hamm in the window. 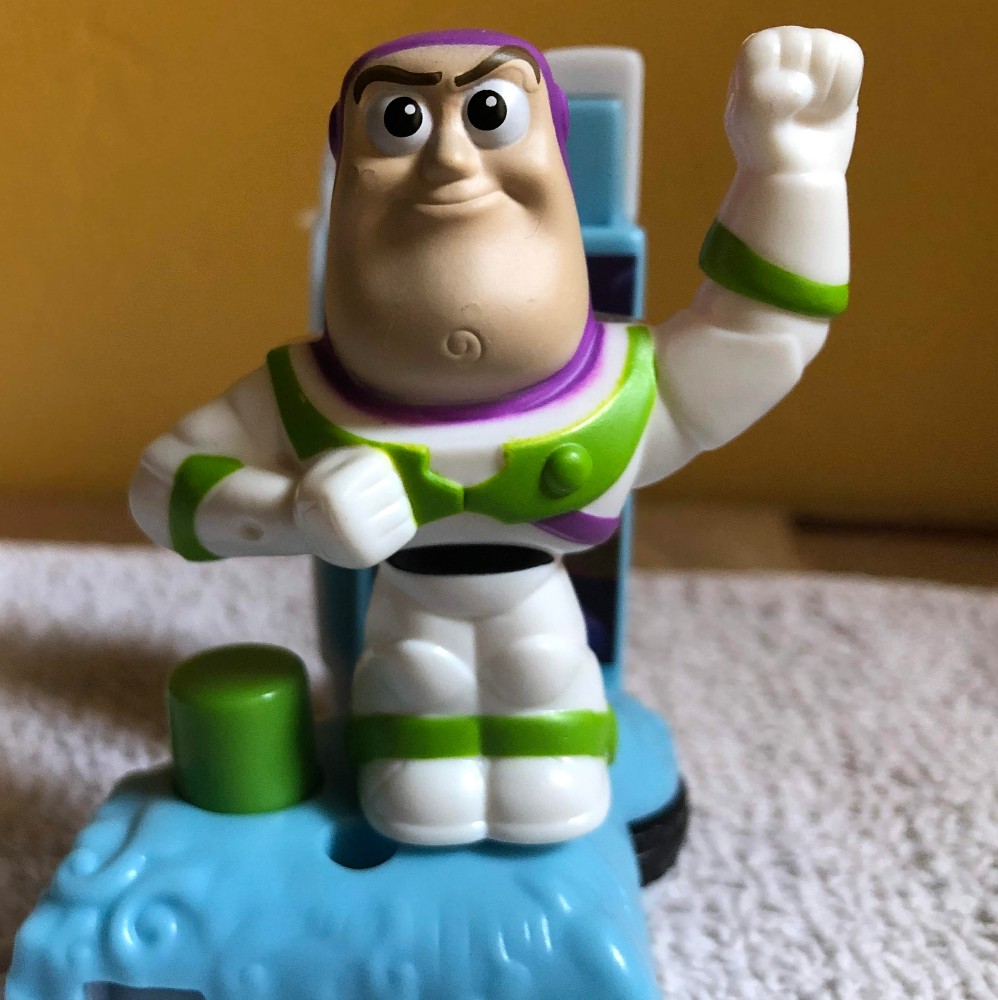 Naturally, Jessie is the most daring of the toys. She is suspended in the air by some rope on two flags. When you pull down, she does multiple spins. A very appropriate choice for our favorite cowgirl. 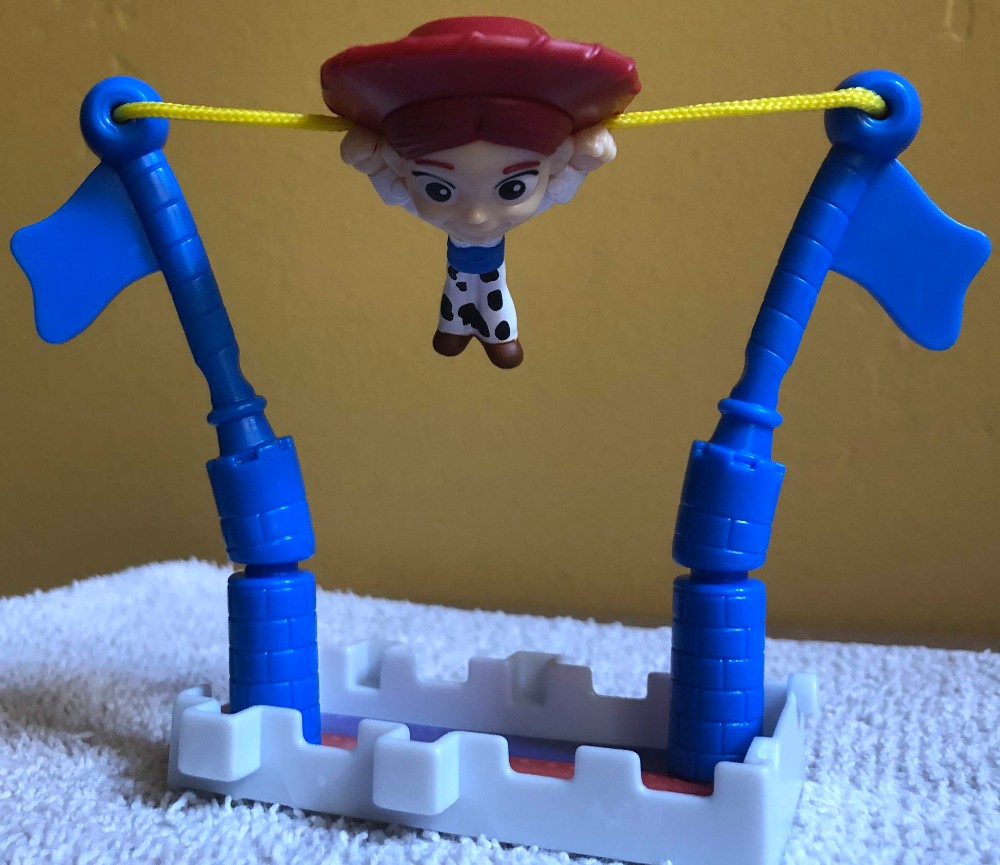 Bo Peep had to be the most fun. There are a few more pieces to put together, but it is worth it. After you apply all the stickers and set up the cardboard milk bottles, Bo Peep twists around to knock off the milk bottles. I could see how this could entertain a kid for a long time. 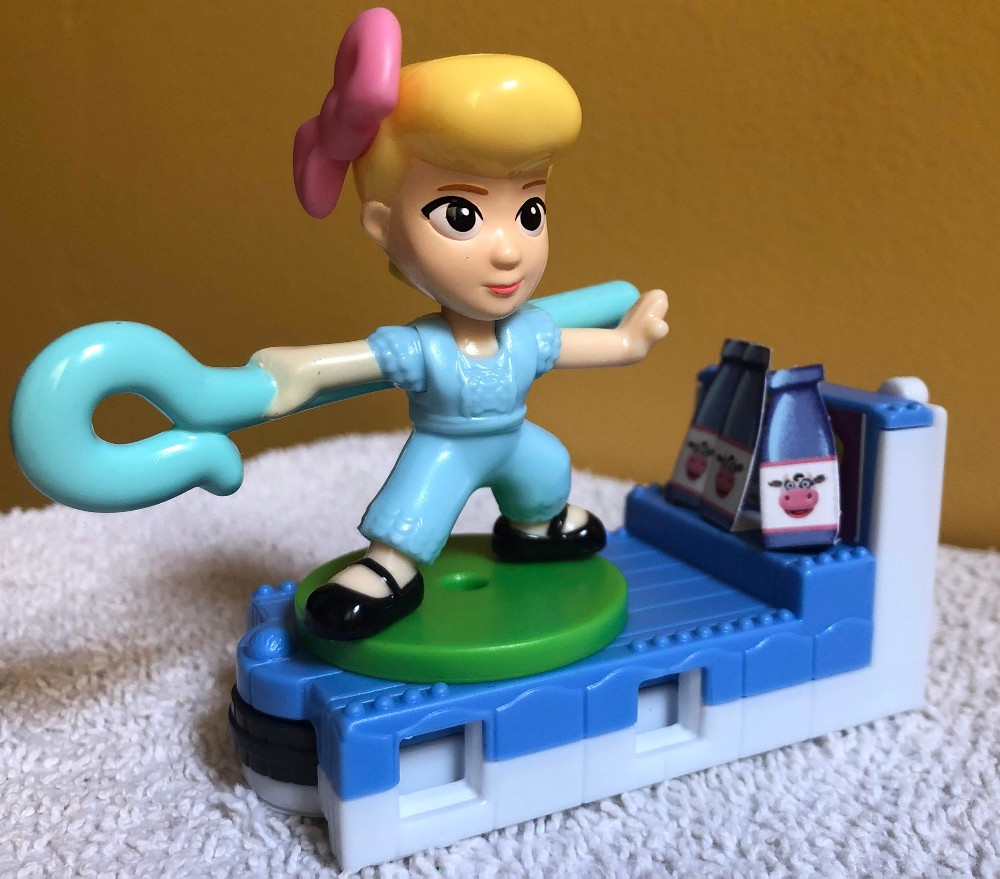 While the toy is not too exciting, I adore Rex and Trixie. Seeing them combined in one toy made me smile. Instead of a carnival game, the toy is more like a simulated carnival ride. Flip the switch on the back and watch as Rex and Trixie go for a spin. 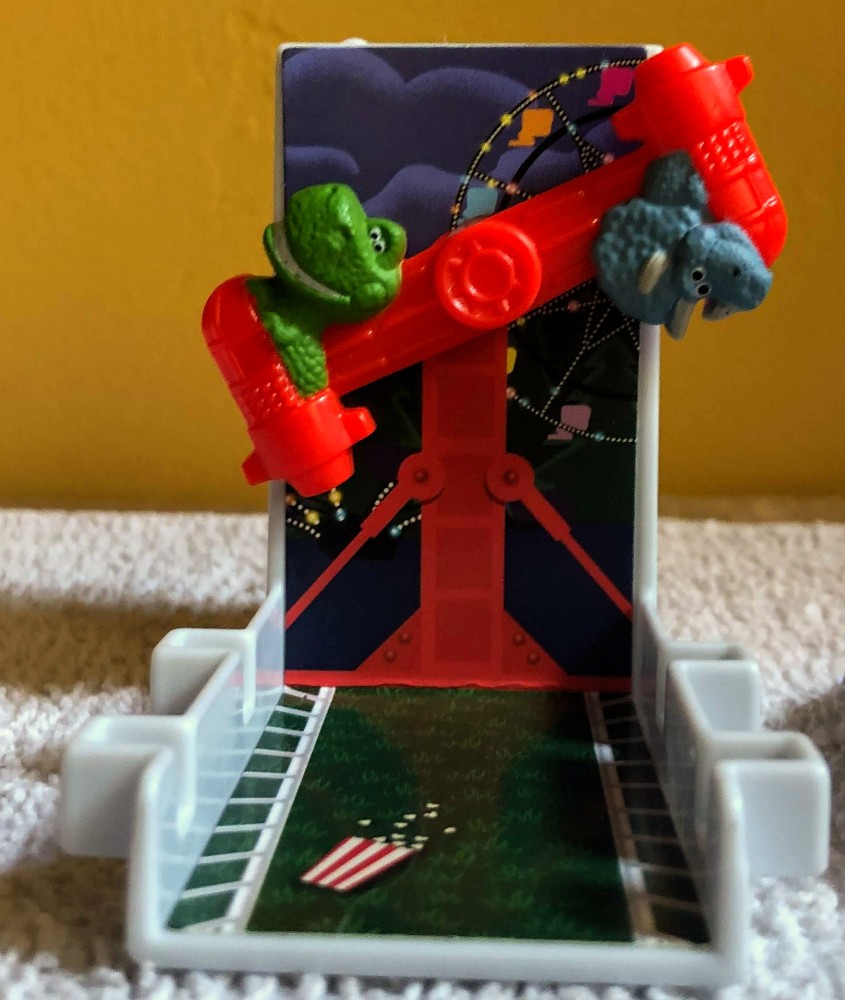 Our favorite green aliens are attached in a whack-a-mole type game. Push down on their heads to get them to lower. It is a game you will never win though because once you push down the last one, two will spring back up. 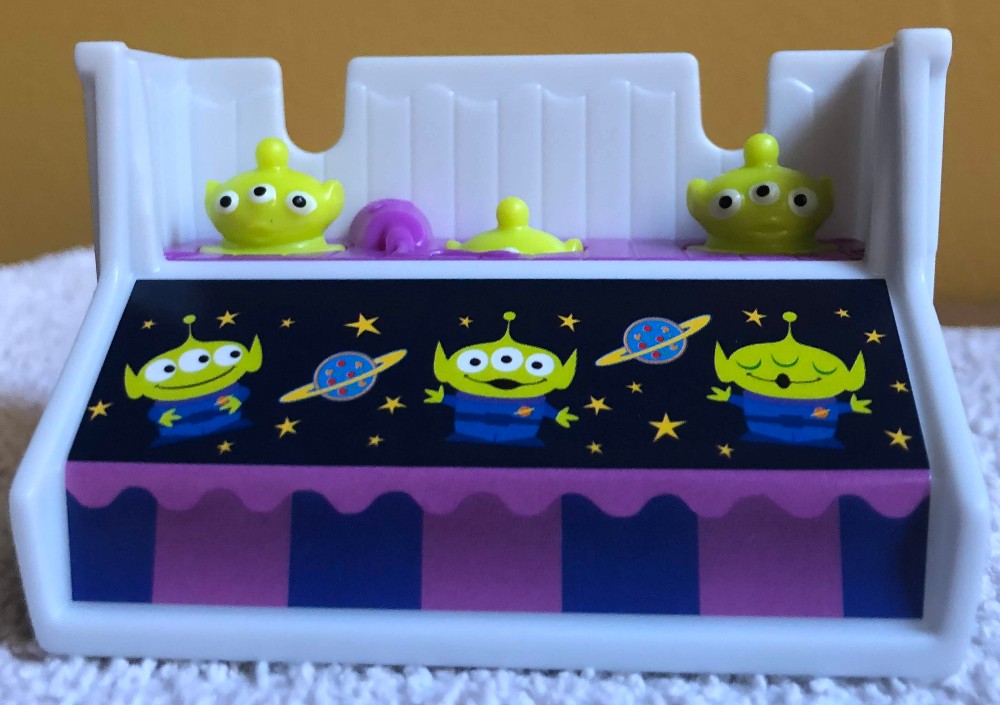 Based on the trailers, we know that Forky faces an existential crisis in Toy Story 4. He is convinced that he is trash. Forky’s Happy Meal Toy has you fling Forky into a trash can. It took several tries to get him to land in the trash, which might be frustrating for some. 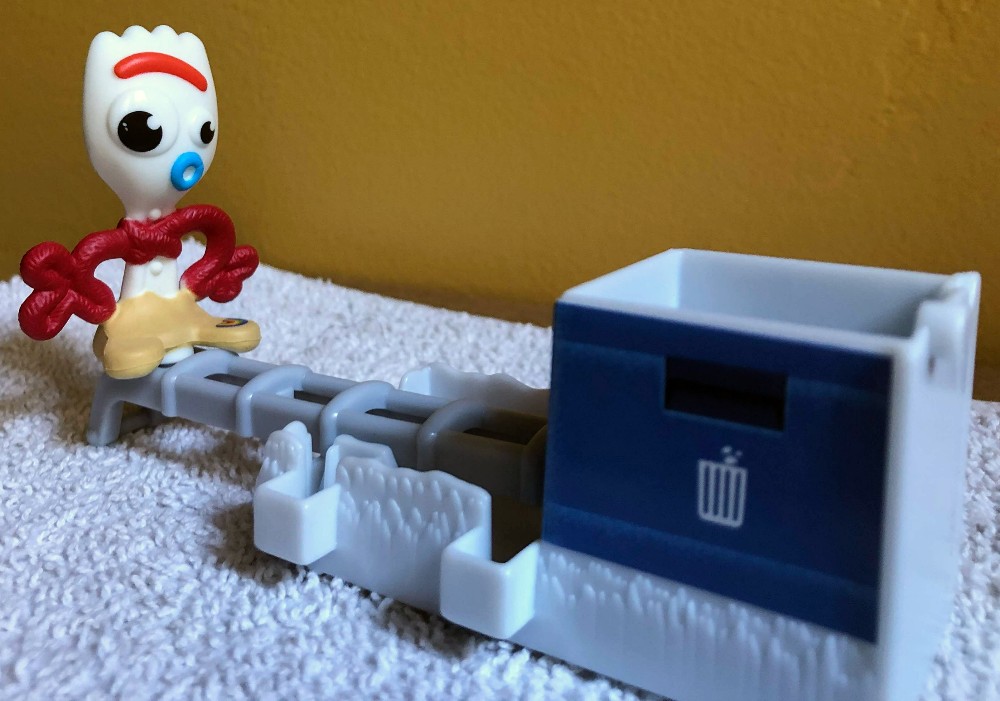 Out of all the Toy Story 4 Happy Meal toys, Duke Caboom is probably the most like a real toy. All you do is connect him to the base and push down on the tab to send him flying across. A child who loves cars and/or motorcycles will get a kick out of this toy. 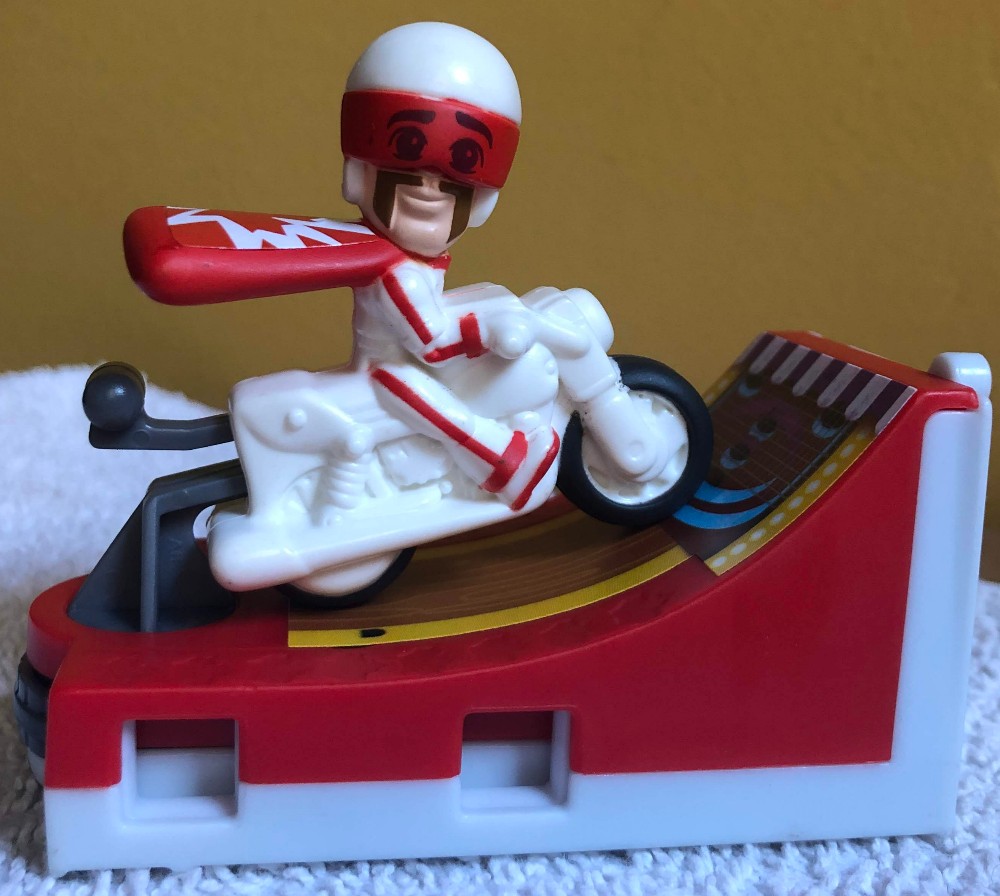 I am very excited to see Ducky and Bunny in the new film. There is a lot of merchandise featuring this duo, so my expectations are pretty high. As a happy meal toy, they are more like a two-player game. The race is on between an orange squirrel and a blue squirrel. Take turns spinning the wheel that features Ducky and Bunny then move the corresponding squirrel however many spaces. 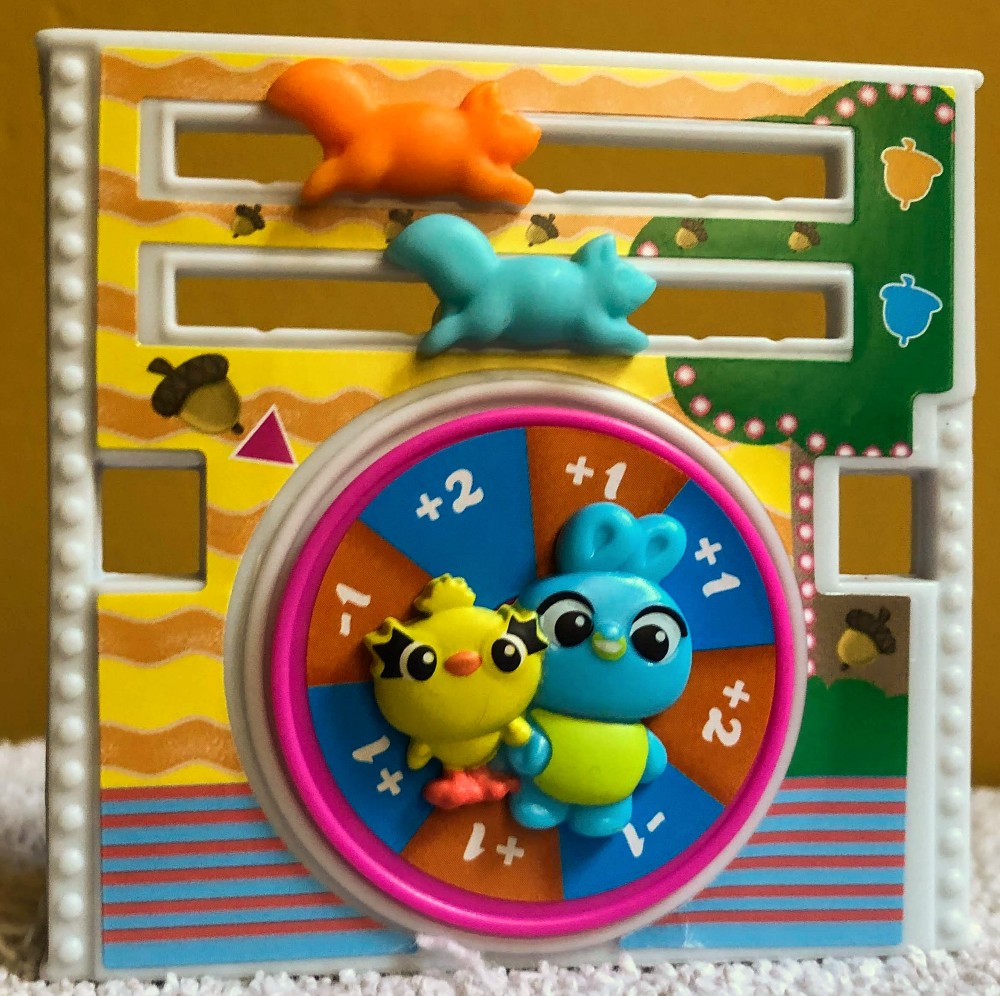 Walking around local fairs, you will most likely hear a parent ask their child if they want to “go on the teacups.” When you look over to see what ride they are talking about, it will be a generic bowl that spins around fast. “The teacups” refers to the memorable ride at Disney parks that is formally titled “Mad Tea Party.” I like how people remember the teacups so fondly that any spinning ride receives the title. Gabby Gabby is sitting in a teacup that you spin around by spinning a black disc on the side of the toy. The black disc is going to end up being another tire for the RV. 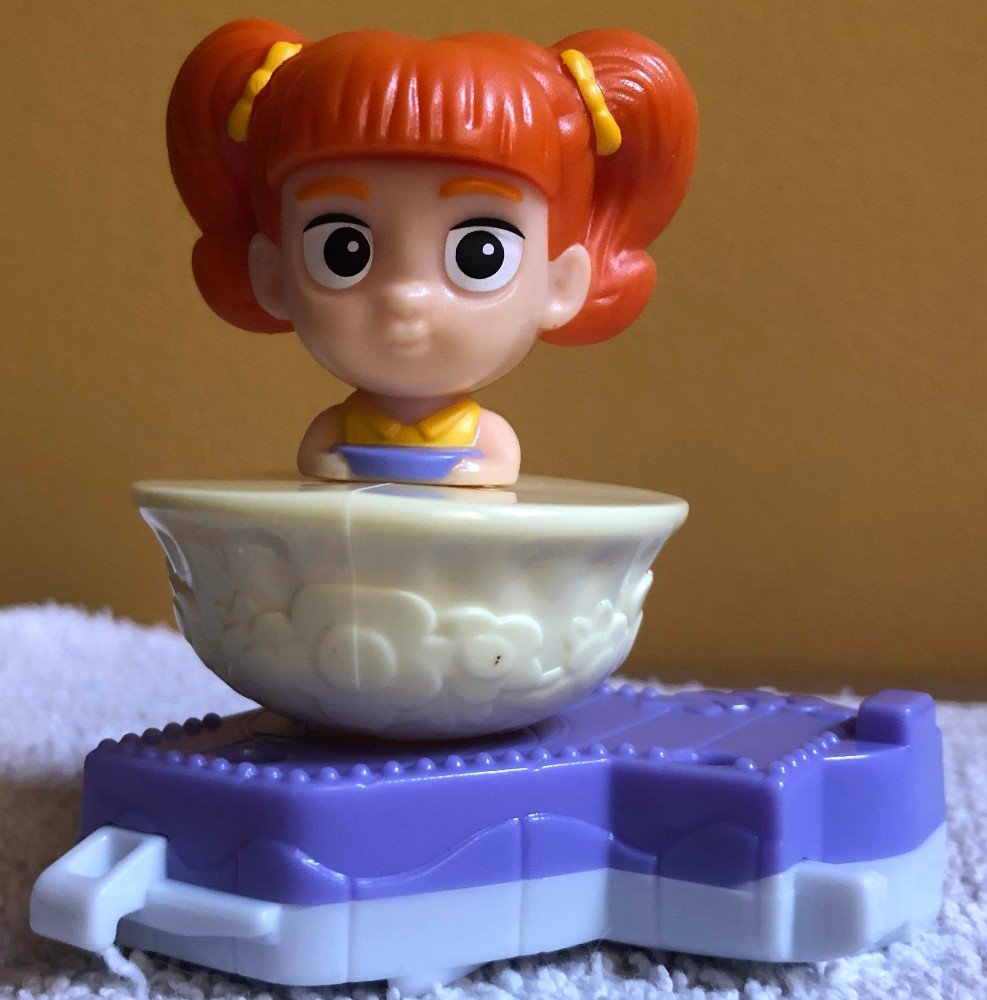 Putting Together The RV With Toy Story 4 Happy Meal Toys

Once you have collected all ten of the individual toys, you can put together the RV. Take all of the characters that are removable off because there will be places for them later. If you are a pro at understanding directions through visuals only (think Ikea directions), then you will have no problems putting the RV together. It is designed for children, so it is just popping the right pieces next to each other. Once everything is together, you can start placing the characters on top. There is no specific guide for placing the characters, so you could put them wherever you want. I did find though that if you want to place all of the characters, they must be in specific positions. I looked at the sample picture from the package to determine the placement. It can fall apart pretty quickly if it were to crash into something but should be just fine for basic play. 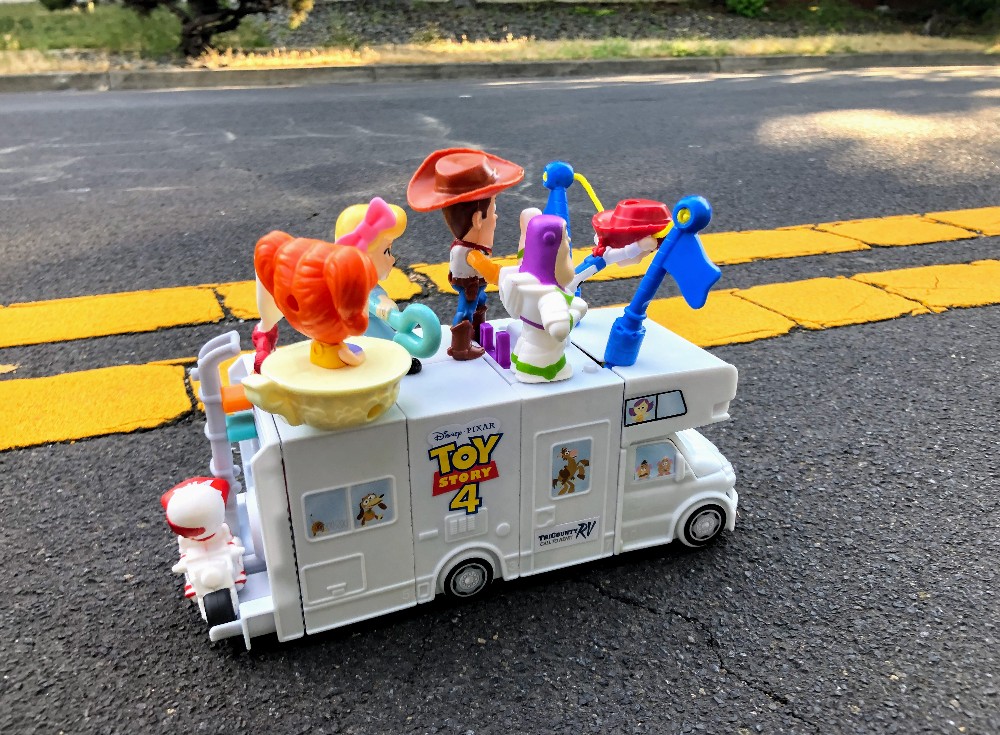 If you are not into the toy aspect of the Happy Meal, there is still a little something for you. Each toy comes with a QR code to enter a contest to win a trip to Walt Disney World. You can only enter once a day. All you do is create a McDonald’s account and input the code manually, or scan the QR code if you are using the McDonald’s app. Even if you don’t win the Disney World trip, you will at least earn Rewards Credits for the Reward Store. Credits can be redeemed for 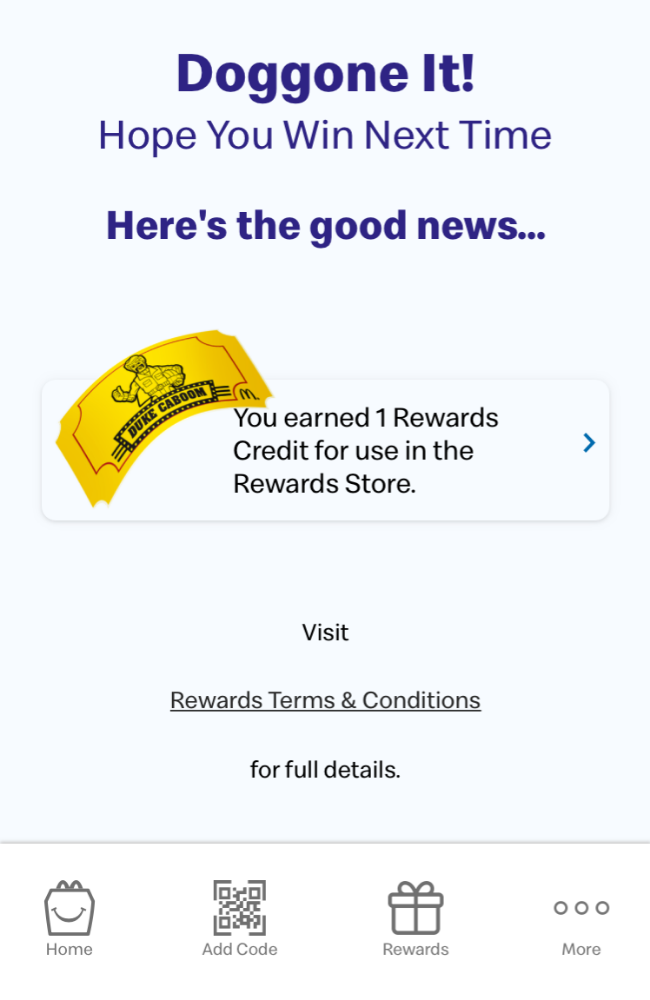 Check in with The Mouse Stops Here to take a look at the coolest Disney Happy Meal toys Mcdonald’s has ever had. You can read more about Toy Story 4 Toys here.