The Toys Are Back In Town: AMC Theatre’s Toy Story Marathon Live Blog 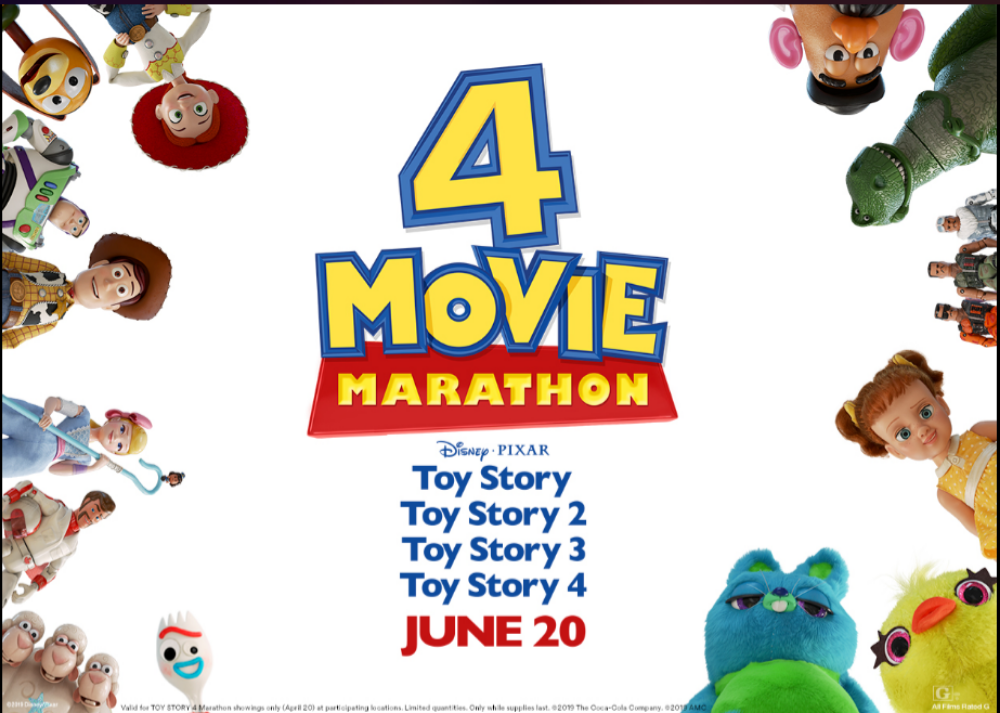 Reliving My Childhood At The Toy Story Marathon

One day in November 1995, my older cousin decided to take my brother, my sister, and me to the movies. I saw a lot of movies in the movie theater in my childhood. In fact, I do not have specific memories of watching some of them because they seem insignificant. But I do remember this day vividly. My mom dropped all of us off in her station wagon and we saw a huge line of people outside. It seemed strange because there is hardly ever a line at my small town movie theater, let alone one that went around the building.

For some reason, I remember holding my ticket and waiting in line. Being six years old, I did not know much about the movie I was about to see. I only knew that it was a cartoon and it will probably be awesome. It did not occur to me that this was the first full-length computer animated movie. I was just happy to be at the movies with my cousin and siblings.

Toy Story is more than just a movie franchise for many people. I was six when I watched Andy open Buzz Lightyear on his birthday. When I was ten, I cried when Jessie recalled losing Emily. Much of my childhood consisted of Toy Story toys, games, and rewatching these two movies countless times. In 2010, I was in college and wondering where my life would go when I watched my old friends get passed on to Bonnie. In a way, I grew up with Andy and much of the same connections to my own childhood toys. Tomorrow, I will get to relive the first three movies by attending the Toy Story Marathon at AMC Theaters in Emeryville, CA.

It is purely coincidental the closest marathon to me also happens to be in the same city as Pixar Studios. I am so hyped for this! Starting this blog with Toy Story 4 content just has me even more excited. I feel like I am that excited six-year-old that was just happy to see a movie with my family.

The Toy Story Marathon will show all four movies in order. In total, it will last eight hours and forty-four minutes. While that is nothing compared to the Marvel Cinematic Universe marathons for Avengers: Endgame, it is still a long time to be in a movie theater. I wanted to attend this marathon and live blog the experience. This post, along with my Twitter, will be updated as the day goes on. To respect the other attendees, I will not update during the movies, only during break times. I will mainly talk about the experience of a long marathon with AMC Theaters and brief reviews of the first three movies in the Toy Story franchise. Later this week, I will be posting my review for Toy Story 4.

Well, off to the movies I go! Stay up to date with this live blog by refreshing every now and then.

It’s almost time!! We arrived at AMC Emeryville at about 9:30. The doors were not open yet and there was only a handful of people waiting. Once the doors open at 9:40, the staff greeted us. As soon as we walked in, there was a table of freebies that included a Woody pin, poster, and postcards. Although it looked that there were only postcards for each character, each one was a pack that contained all of the characters.

We made our way to the concessions for the included special. The ticket did not say exactly what the special was for our marathon tickets. We found out that we had the option of getting a small soda and small popcorn for 5 dollars. After snagging one of the specials, we went into the theater.

Since we will be here for almost nine hours, we reserved seats in the back row on the end. Out of every seat in the place, the seats we snagged will give you the most leg room outside of the handicap row. Plus, we can put our feet up on the bars in front of us. 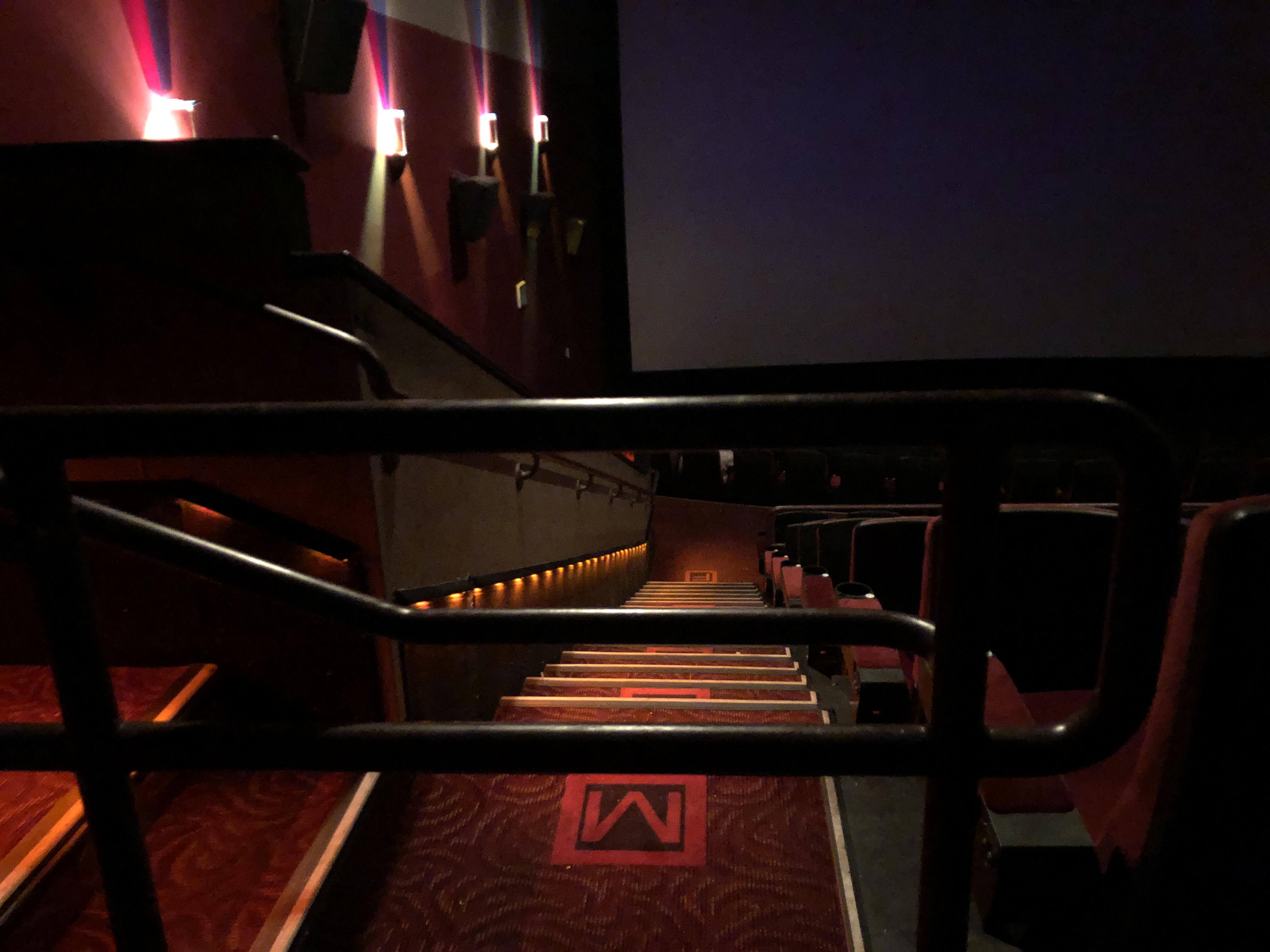 The first Toy Story will be starting in a few minutes, so I will hold off on updates until after the movie. Keep refreshing all day to see more of the Toy Story marathon experience. 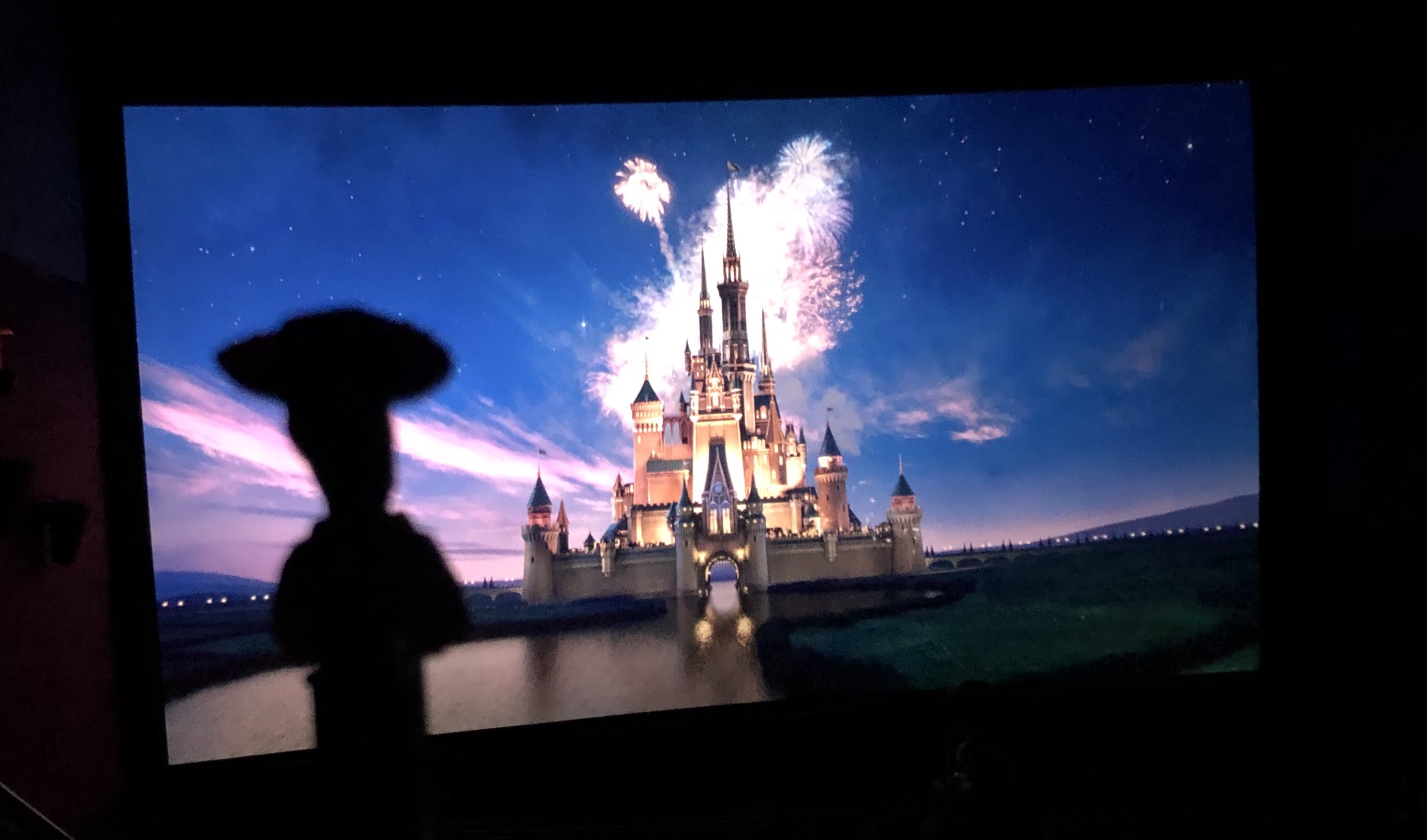 One down, three to go. The credits for Toy Story are rolling now. The seats at the AMC theater are surprisingly comfortable despite not being recliners. I think having the rail to rest my feet will do well for me. Watching the first movie on the big screen was a blast. As many times as I’ve seen it at home, it all felt magical again seeing these characters. Let’s see if I still feel that way after a few hours. Onto Toy Story 2!

At the end of Toy Story 2, it does not feel like I’ve been here for 4 hours. Each movie seems to go by so quickly. Watching these movies again in the theater is reminding me of how much I love this franchise. I recall thinking that Toy Story 2 was the weakest of the bunch. So I expected to want to take breaks during the film. Instead, I found myself not wanting to miss out on the next scene. I could have this same feeling watching it at home, but the fact that it is all building up to the fourth film makes it more exciting. 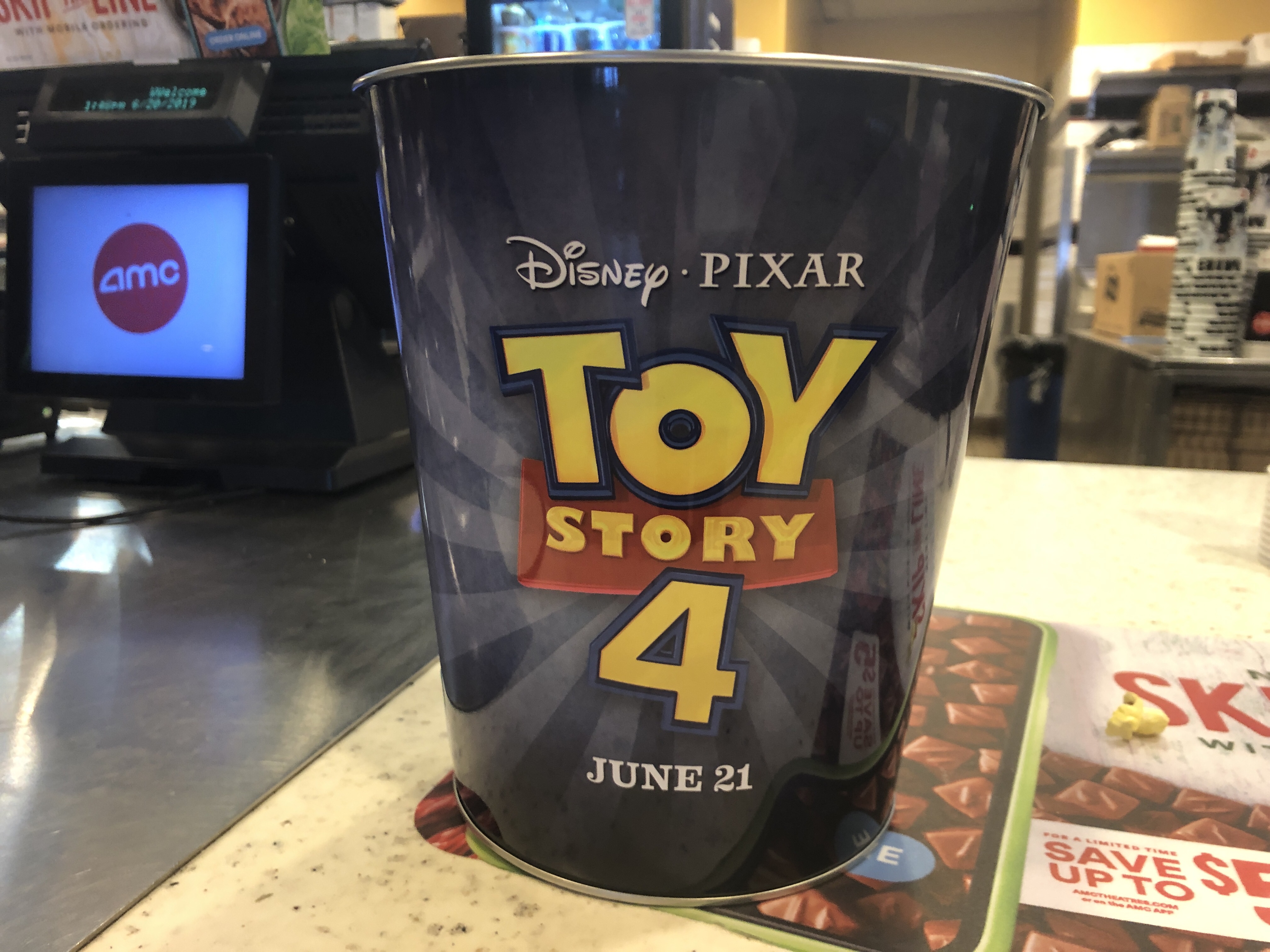 The breaks between each film are certainly longer than I expected. We waited about 45 minutes from the end of the first film and the start of the second. That’s actually pretty nice as you can use the time to stretch your legs or get something to eat that’s not movie theater concessions. One thing that’s great about this AMC theater is that their fountain drinks are self serve so you can actually get refills as you wish. For food, it’s the standard cinema fare but they also have ready-made pizzas and chicken tenders.

I thought by now that I would be anxious to get out of my seat. But surprisingly, I’m sitting in anticipation for Toy Story 3. Keep hitting refresh for my next update

Toy Story 3 ended a little bit ago. I was just as emotional as I was the first time I watched it. If Toy Story movies get progressively deeper, I’m going to a hot crying mess during Toy Story 4. I noticed quite a few people dozing, and overheard some say that they slept through all of the third movies. As soon as the credits were over, I got up to walk around. Just sitting and watching a movie is not a difficult thing to do, but it does wear on your legs a bit.

When I walked around, I noticed that there are still some Toy Story freebies. AMC employees were still giving them out, which is nice.

Even though I’m a little sleepy and my legs hurt, I’m so excited for Toy Story 4. I’ll post a few more updates before the day is over. Stay tuned! 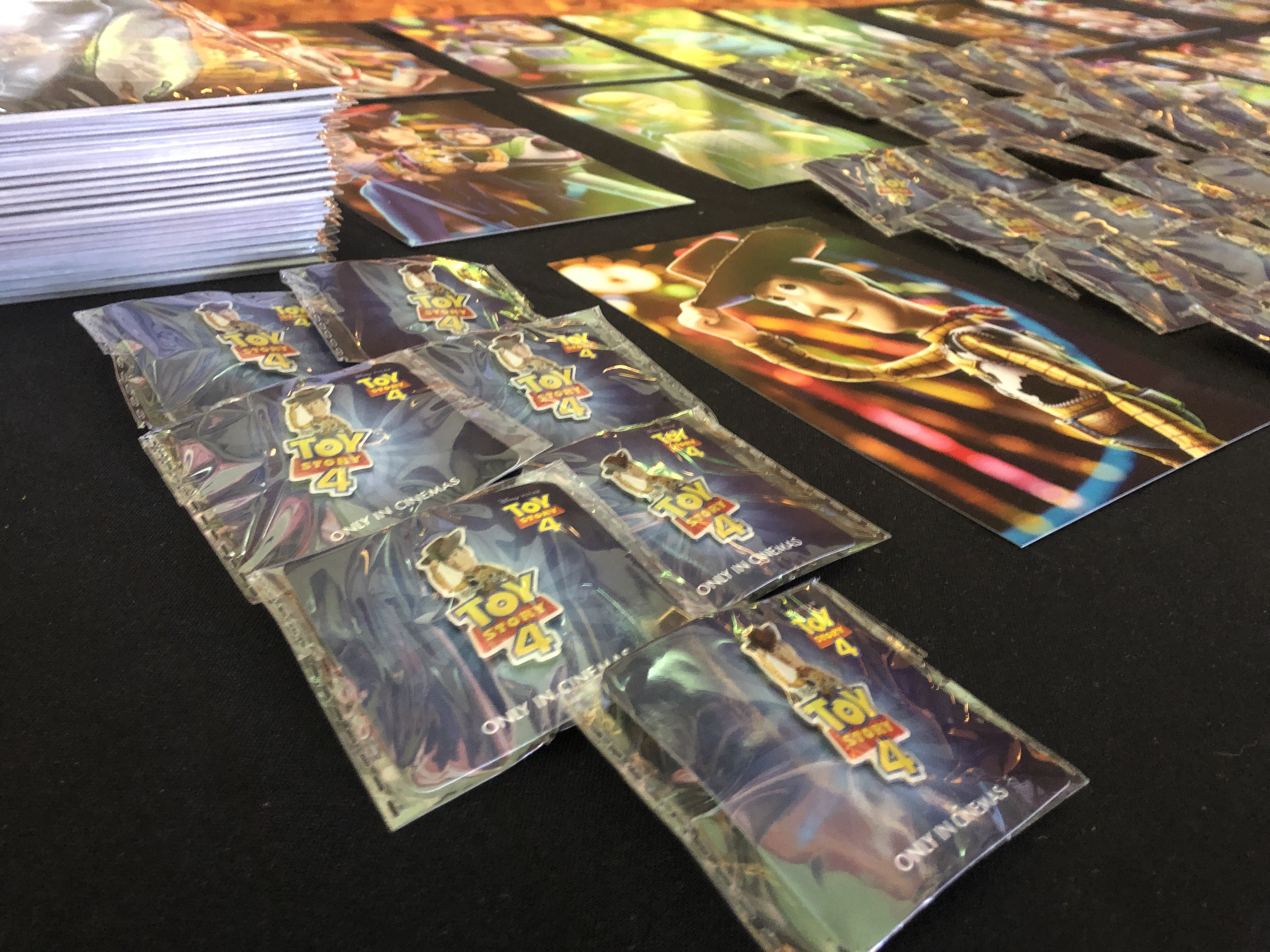 Well, it’s all over now. Somehow I feel exhausted even though all I did was watch movies all day. I’ll be reviewing Toy Story 4  in another post. The Toy Story marathon was worth it if it’s a franchise you really love. I felt deeply moved by being able to rewatch the old films I grew up with. If I wasn’t as big of a Toy Story fan, I think I would get over the experience fast. It was nice to be able to watch the older movies on screen again. Plus, there were limited trailers. Each movie started from the beginning. The only trailers for Toy Story 4 were for Disney films. Make sure you stay after the credits and come back to The Mouse Stops Here to read my full review of Toy Story 4. 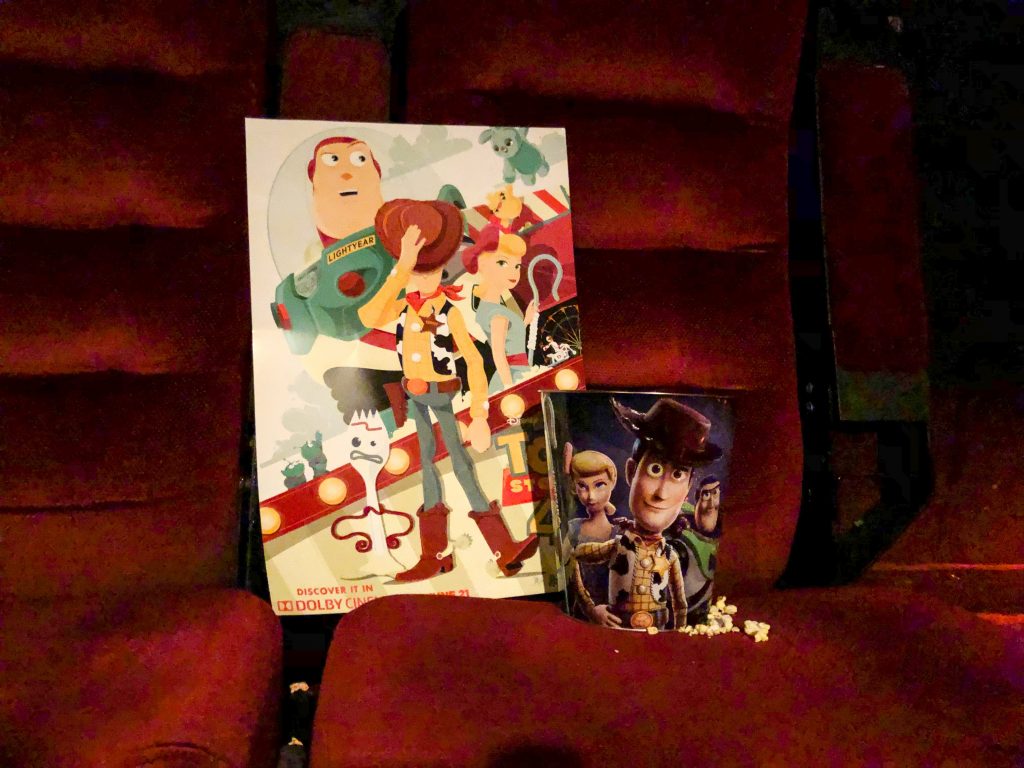