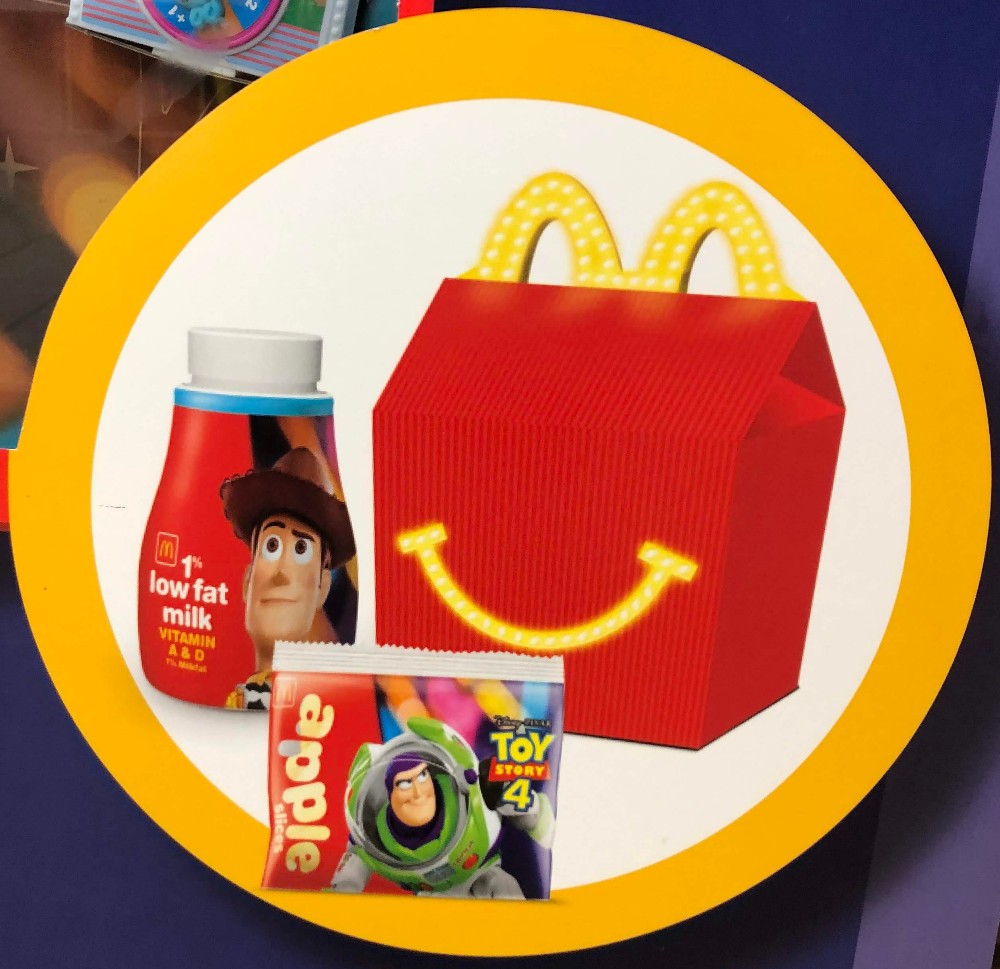 Posted at 13:54h in Merchandise, Movies by Ellie 0 Comments

Recently, I made a post about Toy Story 4 Happy Meal Toys at McDonald’s. This got me wondering about the Happy Meal toys that went with each Toy Story film. Were they always at as cool as the latest ones? Or are they underwhelming? I put together a guide for you to see how Toy Story Happy Meal toys have changed over the years.

Here’s something that might help you win at trivia night: Toy Story 2 and 4 were the only movies to have Happy Meals toys from McDonald’s. Burger King had the honor of promoting the original Toy Story and there were no Toy Story 3 kids meal releases.

Have It Your Way: Disney Toys At Burger King 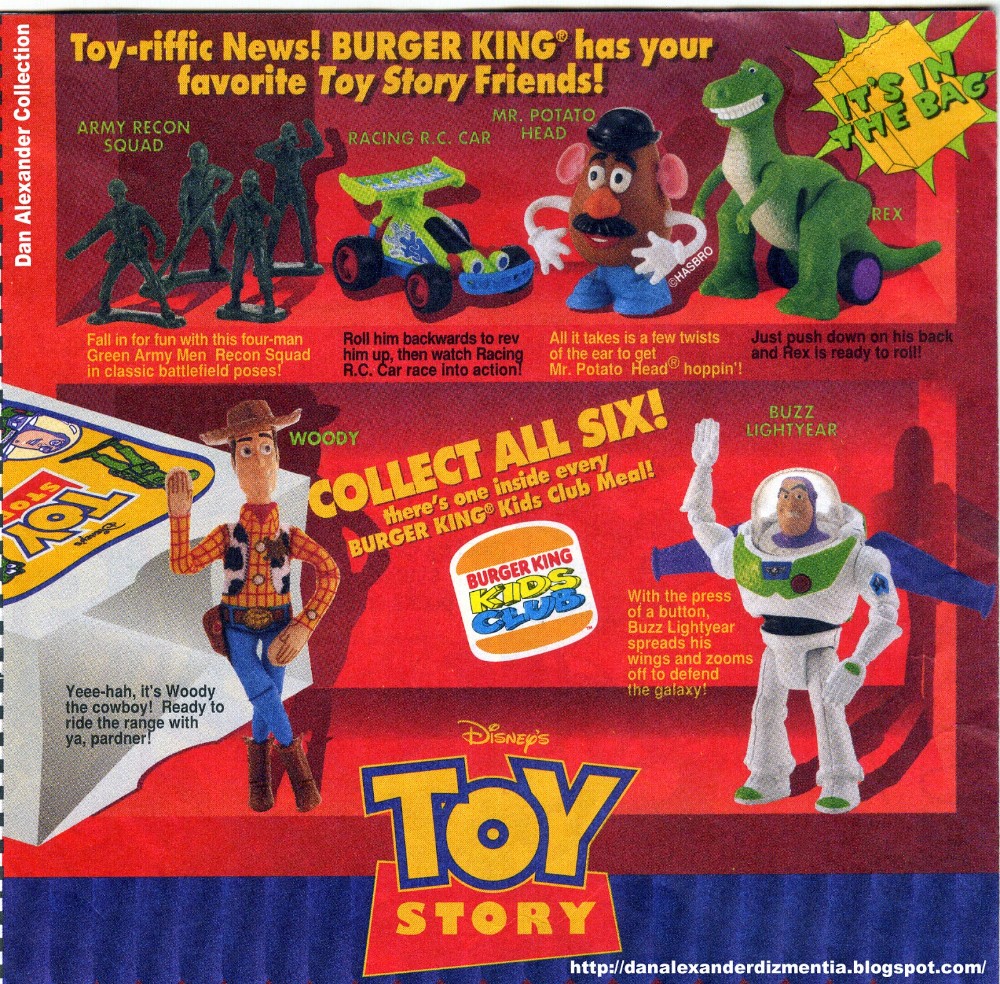 We often associate McDonald’s as the highest caliber of fast food toy. However, Burger King’s promotion with Toy Story was a huge success. So much so, they had two runs. The first was in 1995 when the movie launched in theaters. The second was in 1996 to celebrate its release on video.  The toys themselves were little figures with a bit of something extra. The first set included: 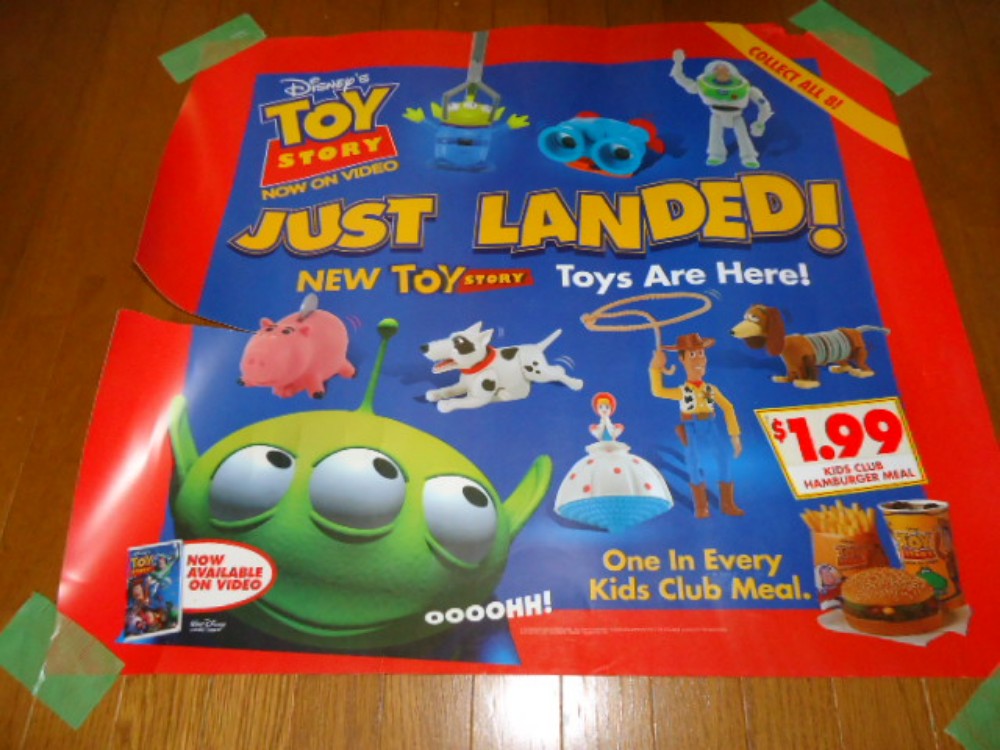 With the launch of Toy Story on video, Burger King released a second set of toys. This second set had: 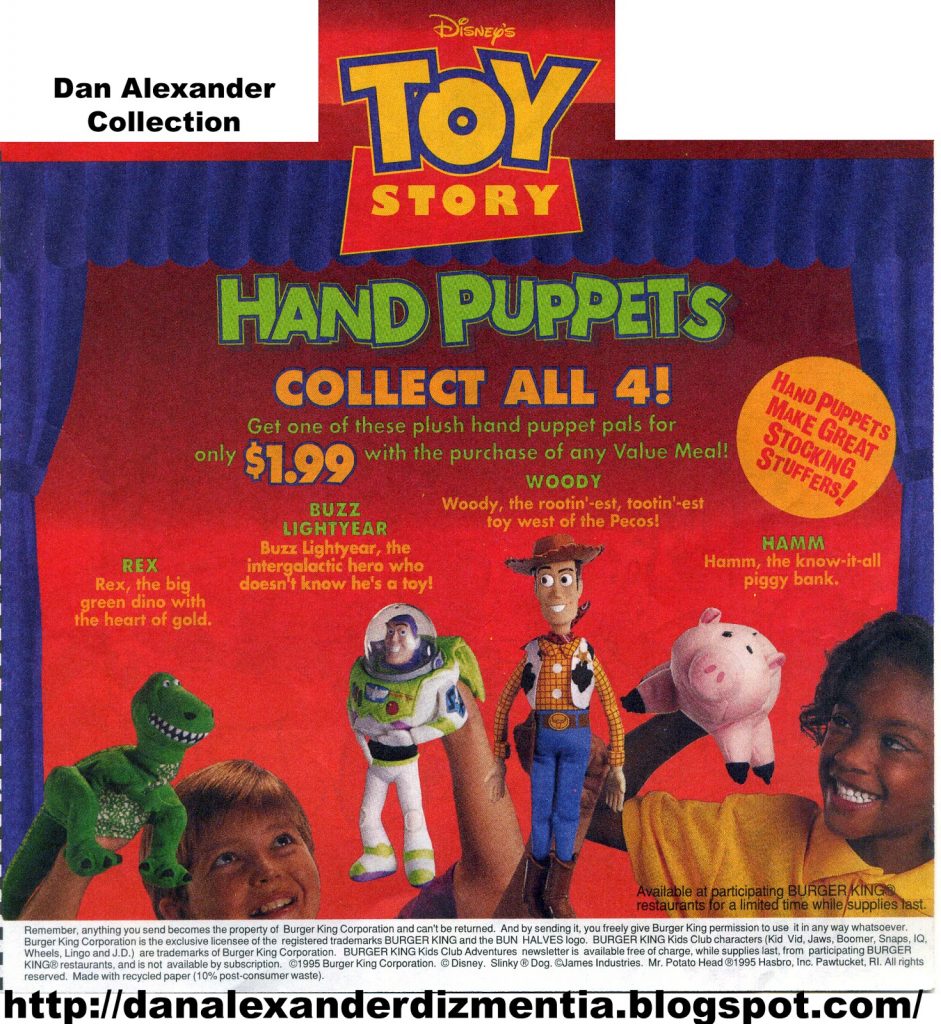 Part of what made the Burger King Toy Story promotion huge was the different options. You could get a toy with your meal, or you could get a deal on a puppet or talking toy. There were four options for Toy Story Pals puppets:

The Woody puppet was simple and had pockets for your fingers to move his legs. Buzz had a plastic helmet, and you could slide your fingers into his arms to move them. Hamm required you to put your hand into his legs and neck so that you could operate his whole body. The Rex puppet could be controlled by his back legs, and your middle fingers could move his neck.

In addition to the puppets, you could opt to purchase a talking Toy Story Toy when you bought a kids meal. You only have three choices for the talking toys: Woody, Buzz, and RC. These three were likely selected so that kids could recreate the climactic scene in the film in which Buzz and Woody reunite with Andy and the toys.

We all know that Toy Story was a huge success. In total, it grossed over $190 million in North America alone. Naturally, people had Toy Story fever in 1995 and 1996. Burger King’s all over the countries were selling out of their kid’s meals toys. I found a 1995 article from the Baltimore Sun where one Burger King franchise owner said,

“Basically, we underestimated the demand for ‘Toy Story’ toys…They’ve taken off as the largest premium we’ve ever seen.”

Another 1995 newspaper from the LA Times said that one Burger King location was 600 kids meals a day. Previously, they would sell about 125.

Personally, I had the Hamm and Woody puppets, and the Hamm and RC plastic toys. I showed up to school one day with my Hamm puppet to show all my friends only to find that many of them hand their own already. Many of our playground games incorporated our Toy Story Burger King toys. I was at the height of my Mighty Morphin Power Rangers phase.

My friends and I would use our Toy Story puppets to act out action sequences as power rangers. Instead of Hamm portraying a pig, he was the evil monster my power ranger friends and I needed to take down. In a way, we were a lot like Andy. Our toys were whatever our imagination needed at that moment and not necessarily was it is supposed to be. 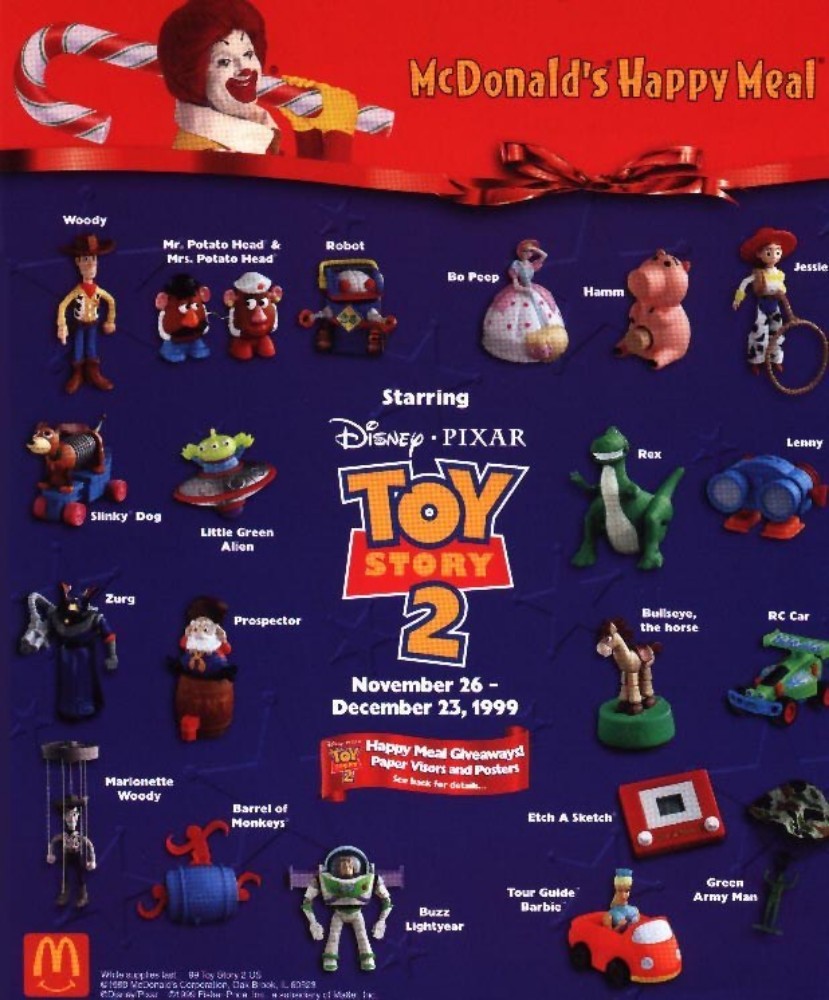 In 1998, McDonald’s and Disney created a partnership in for promotional tie-ins. This agreement meant that any Disney film could have a McDonald’s Happy Meal Toy with it. Toy Story 2 had their promotional tie-in with McDonald’s. You could end up with one of 20 toys in your happy meal featuring different characters. Each character had some movable component to it. The figures included were:

With so many options, you could potentially go to McDonald’s multiple times and end up with something different each time. I feel like we rarely see this many options from McDonald’s. It’s awesome because of how broad they can make the selection. Toy Story favorites that might not always get the most love receive some attention.

I come across a lot of Toy Story Merch, but I do not think I have seen Lenny or the Prospector in much. The Marionette Woody is especially cool. McDonald’s took a new twist on a favorite character that is tied into the upcoming film. If we got this in our Happy Meal, we might be confused. But once we saw the movie we might say, “Oh! This is the Woody’s Round Up version!”

What Was The Deal With Disney And McDonald’s?

We often associate Disney fast food toys with the iconic Happy Meal. In the late nineties, Disney did not have an exclusive agreement with any one restaurant. Each film release or special promotion was considered by different restaurants. McDonald’s and Burger King often competed for the privilege of delivering kids meal toys.

For instance, Burger King declined the rights to put out toys based on 101 Dalmatians in 1996. McDonald’s picked that up and put out 101 different toys based on the lovable pups. Because no one restaurant had exclusive rights, Disney toys were put out at the different restaurants all the time.

However, it is McDonald’s that is known for having the best toys. Some of the most memorable toys from the 1990s and 2000s included Toy Story characters.

In 1996, McDonald’s put out the Walt Disney Masterpiece Collection toys. These were small figures that came inside a small VHS box of their movie.

For instance, the Woody figure was in a Toy Story box. There were several phases of these toys at different times. Odds are that if you went to a McDonald’s in the late 90s, you had one of these toys if not more. I always thought it would have been cool if McDonald’s kept these going in some way. Even if VHS has been phased out and no one knows what it is, the boxes are neat. 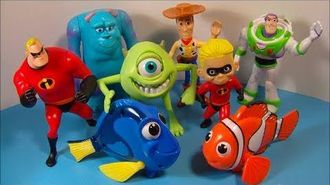 Pixar Pals were introduced in 2005 and featured toys from Toy Story, Monsters Inc., Finding Nemo, and The Incredibles. You could get a Woody or Buzz toy, but you might be a little disappointed. The toys had movable arms, and that was about it. I would be more impressed if they came in a cool box like the Masterpiece Collection toys.

When Disney had a reason to celebrate, McDonald’s was there with a Happy Meal toy. In 2001, the Golden Arches released the 100 Years of Disney line to mark Walt Disney’s 100th birthday.

Many considered these toys to be made of higher quality, but they were just figures. Each figure was a different Disney character standing on a base with its name and release year on it. There were 100 total toys to collect in that set, including a Buzz and a Woody. 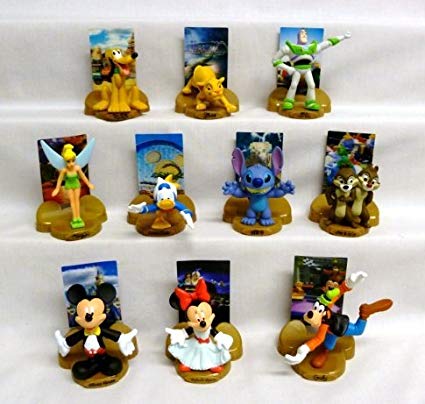 Additionally, Disney marked the 50th anniversary of Disneyland with their own “Happiest Celebration On Earth” campaign. This included ten figures that matched up with an attraction at Disneyland. Our favorite space ranger is featured in this set.

Where Are The Toy Story 3 Happy Meal Toys?

It seems a little fitting that Toy Story 3 did not have a promotional tie-in with any restaurant. Andy was growing up and going to college, and most of the kids that were up with Toy Story were in a similar position. They likely would not be as excited about Happy Meal Toys as once before. But this was not the reason why Toy Story 3 was left out.

Disney terminated their partnership in 2006 after establishing nutrition criteria for their brands. Therefore, Toy Story 3 did not have a promotional tie-in with any restaurant. Even if you try to Google “Toy Story 3 kids meals toys”, you will only find the Toy Story 4 toys.

McDonald’s And Disney Are Together Again

After McDonald’s made changes to their Happy Meals in 2018, they were able to revisit their agreement with Disney. McDonald’s reduced the calories, saturated fat, sodium, and added sugar in Happy Meals Toys. This change was enough for them to fall back into Disney’s nutrition criteria.

McDonald’s can work with Disney on promotional tie-ins for any of Disney’s films from Pixar, Marvel, and Lucasfilm. If the Toy Story 4 happy meal toys are any indication, there is bound to be some exciting new toys in the future.

For more great Disney history check out a blast from the past with our Disney Store in Fairfield review.